Ectodermal dysplasia is a rare disease, occurring in 7 in 10,000 births, that presents in more than 200 different clinical forms.1 Freire-Maia and Pinheiro2,3 described the four major clinical manifestations of ED: Abnormalities in the hair, nails, teeth, and sweat glands.

One particular clinical form is hidrotic ED with the WNT10A gene mutation. This mutation plays an important role in the molecular pathogenesis of nonsyndromic cases of hypodontia, ED, and other rare syndromes, such as odonto-onycho-dermal dysplasia (OODD) and Schöpf-Schulz-Passarge syndrome (SSPS).4-10

The aim of this study was to identify a new clinical symptom, i.e., specific to hidrotic ED with the WNT10A mutation. It addresses the migratory trend of the lower second permanent molars, when they are present, to the ramus or coronoid process. To the best of our knowledge, no data in the literature describe this trend in the case of hidrotic ED.

A 10-year-old male patient (P1) was referred to the Department of Pediatric Dentistry at the Lebanese School of Dentistry, complaining of severe oligodontia. After clinical and radiological examinations, a primary diagnosis of hidrotic ED was established. A treatment plan including prosthesis and implants was implemented.11 Informed consent was also obtained from all of the patient's family members, who underwent clinical, radiological, and genetic examinations to confirm the diagnosis.

The examination axes that were applied are outlined below:

Retrospective examinations of the first panoramic radiographs and recall intraoral examinations were performed on all of the subjects who were clinically affected (n = 8). In cases showing the presence of germs 37 and 47 (n = 2), a second panoramic radiograph was conducted 12 months later. This was done to detect any unusual deviations of the axis of eruption that had occurred over time and the tendency of the concerned teeth to migrate to the ramus. The main objective was to establish an interceptive treatment.

In these cases, the axis of eruption was drawn tangential to the mesial surface of each concerned tooth germ (37, 47) on the first and second panoramic X-rays. The angle formed by the tangent to the vertical was measured and recorded on each radiograph (Figs 1 to 3). The deviation and the direction of deviation (mesial or distal) of the axis of eruption were calculated and noted. Similarly, panoramic X-rays were performed on the five other patients who were missing germs 37 and 47, in an attempt to find any new pathological symptoms.

A literature search was initiated to identify clinical cases describing impacted lower second permanent molars in the following situations: (1) Oligodontia, (2) hidrotic ED, (3) hidrotic ED with the WNT10A mutation, and (4) ED with facial phenotypes similar to the one we described. The main objective was to determine the presence or absence of germs 37 and 47 in these patients.

The analysis of the family pedigree revealed six consanguineous marriages between seven families. Among three of these families, eight had members with hidrotic ED (Fig. 4).

The clinical, radiological, and phenotypic analyses produced the following results (Figs 1 to 3, 5 and 6):

Patient no. 3 (P1) presented with ectopic migration of the lower second permanent molar germs due to the absence of interception. His eyebrow hairs are scattered and sparse with severe oligodontia in permanent dentition

Comparison of the eruption axes of the lower second permanent molar germs after 1 year. A screw is present into the 55 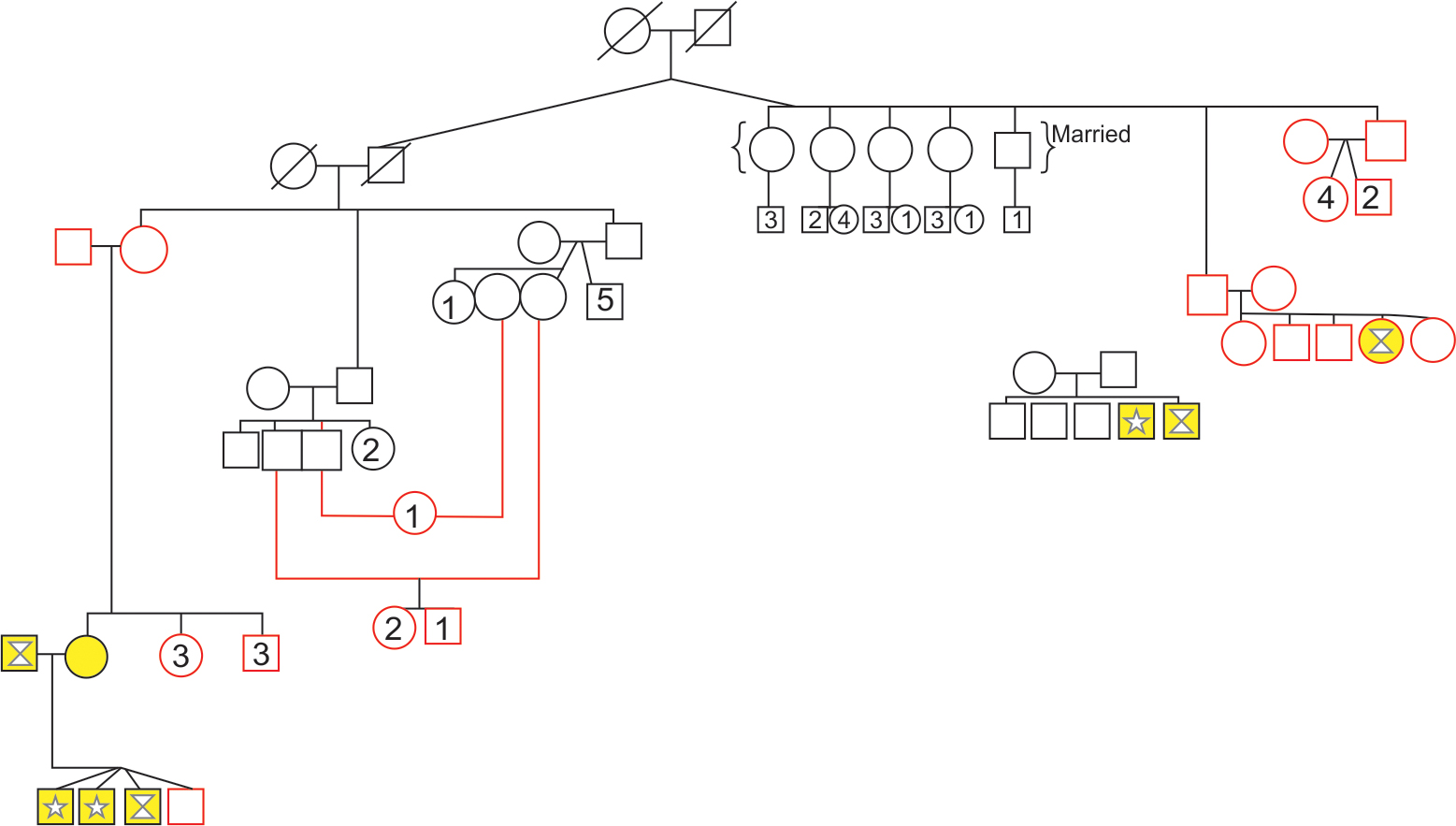 Patient no. 1 after dental treatment. His eyebrow hairs are scattered and sparse with severe oligodontia in permanent dentition

Patient no. 2 has one filling in the second upper left primary molar. His eyebrow hairs are scattered and sparse with severe oligodontia in permanent dentition

The genetic analyses of the 20 individuals from the three families affected by hidrotic ED confirmed the presence of the WNT10A gene mutation [ChR2: 219755026G> T, NM_025216.2 (WNT10A): c.697G> T, *p.Glu233 (homozygous)]. The analyses were conducted in collaboration with the Center for Dental Manifestations of Rare Diseases, Faculty of Dentistry, University Hospital, Strasbourg, France.

The second X-ray examination indicated that five of the patients had (1) lost most of their temporary teeth and were in the process of losing those that remained (acute root resorption) and (2) agenesis of all permanent molars and in the anterior sectors (Fig. 7). Three other patients had posterior and anterior agenesis, but germs 37 and 47 were present and showed an atypical angle in their axes of eruption (Table 1). In the case of patient no. 1 (Figs 2 and 5), after 1 year, germ 37 inclined 11° mesially and germ 47 inclined 4° distally. In the case of patient no. 2 (Figs 3 and 6), germ 37 inclined 9° distally and germ 47 was unchanged. Finally, in the case of patient no. 3, both germ 37, which was vertical, and germ 47, which inclined 5° distally, migrated to the ramus and coronoid process respectively.

As shown in Table 2, only 5 of the 40 cases examined stated the presence of the lower second permanent molar without any information about their axes of eruption. One (U1) of these five cases showed migration of germs 37 and 47 to the ramus and coronoid process respectively.6-17

Implant-retained overdentures and implant-supported constructions for young children with severe oligodontia and anodontia are acceptable methods of dental rehabilitation for children with ED.18 The use of mini dental implants, such as prosthetic supports, has resolved the problem of reduced alveolar ridge thickness.11

The pedigree revealed the extent of consanguinity, which may explain the presence of the same mutation and phenotype among members of different families. These families subscribe to the same religion and originated from the same region as the families described by Mégarbané et al.7,8

Many authors have described lower wisdom tooth migration to the ramus and coronoid process.19,20 The migration of the lower second permanent molar is exceptional. The only case (U1) reported occurred as a clinical feature of severe oligodontia in patients with hypohidrotic ED.12 Although another case of molar migration with severe oligodontia was described, the authors did not specify whether it was an ED or if the migrated teeth were second permanent molars.13 In both cases, no genetic investigations for the WNT10A mutation were conducted. The published photo of patient U1 exhibits a similar phenotype to the hidrotic ED cases we describe (i.e., scattered and sparse eyebrow hairs with severe oligodontia in permanent dentition).12 This indicates that the patient may have had a case of ED with a WNT10A gene mutation.

In general, when a tooth has an ectopic axis of eruption, it is imperative to interfere surgically to restore the tooth's axis or facilitate its emergence.21 When a molar distal inclination is confirmed, an interceptive surgical procedure must be performed. Furthermore, periodic and thorough follow-ups are recommended for teeth with vertical axes and, consequently, intervention is required at the first sign of distal inclination of their axes of eruption. The case of no. 3 (P1) illustrates the distal inclination of a previously vertical axis before eruption that leads to the migration of molars to the ramus (Fig. 1).

These findings are of great interest, as the phenomenon of ectopic migration to the ramus or the coronoid process occurred in hidrotic ED patients with a WNT10A mutation. To the authors' knowledge, no such cases have been described in the literature.

Finally, we believe that this anomaly is a new clinical symptom of hidrotic ED with the WNT10A gene mutation. When the lower second permanent molars are present, close monitoring of their axes of eruption is required to detect and prevent ectopic migration.

Hidrotic ED is a very rare disease. As this study included a limited number of cases, further investigations using larger sample sizes are required. Future studies must assess the frequencies and treatment modalities for these clinical cases.

Hidrotic ED accompanied by the mutation of the WNT10A gene presents with phenotypic dentofacial variability. The presence of lower second permanent molars in these individuals should be a particular clinical symptom to add to the overall clinical features of hidrotic ED and requires careful and regular monitoring to detect and prevent ectopic migration of these teeth to the ramus or coronoid process.

Why is This Paper Important to Pediatric Dentists?

What does This Paper contribute?