Clinical and Radiographic Evaluation of Curcumin as an Obturation Material in Deciduous Teeth: A Randomized Controlled Trial

Materials and methods: This study included 64 primary molars with irreversible pulpitis indicated for single visit pulpectomy. After obtaining informed consent from the parents, all the teeth were randomly allocated to one of four groups. Pulpectomy was performed using rubber dam isolation and was obturated. The samples were categorized into the four groups based on obturation material namely, group A: curcumin with calcium hydroxide in equal proportions, group B: curcumin, group C: calcium hydroxide, and group D: Metapex. Clinical and radiographic outcomes were evaluated at time intervals of 10 days, 1 month, 3 months, and 6 months. Data was subjected to statistical analysis. Chi-square tests were used compare the groups.

Clinical significance: Curcumin and calcium hydroxide paste can be used as an obturating material with further follow-up studies.

Pulpectomy is a complex procedure involving chemomechanical shaping of canals and obturating them with suitable medicament. The prime challenge in endodontic obturation is to achieve a fluid-tight seal along the whole length of the canal system.1 Rifkin2 described ideal obturation materials as those which are resorbable, radiopaque, noninflammatory, nonirritating to underlying permanent tooth germ, easy to insert, easy to remove, and most importantly which is antimicrobial in nature. According to the literature, there are no ideal obturating materials fulfilling the mentioned criteria.1

Hermann3 in 1921 first introduced calcium hydroxide which is now extensively used materials in pediatric endodontics owing to its high alkalinity and its elaborate antimicrobial activity.4 Metapex is silicone oil-based calcium hydroxide with 38% iodoform and is considered to be near ideal obturating material for deciduous tooth.5 However, Iodoform can provoke the periapical tissues, which lead to cemental necrosis.6 Few cases reported rapid resorption of iodoform inside canal leaving spaces popularly known as hollow tube effect, which undermines the success of the pulp therapy.7This disadvantage forms a base for urge of ideal obturating material with minimal adverse effects.

Recently, the use of naturally available sources and herbs is evolving with great interest, as they are more biocompatible, easily available, and cost-effective with increased shelf life, low toxicity, and lack of microbial resistance and being effective simultaneously. Curcumin constitutes major fraction and is responsible for wide biological and medicinal values of turmeric.8 Curcumin after continuous exploration reported to exhibit antibacterial, antiviral, antifungal, antimicrobial, anti-inflammatory, antioxidant, antidiabetic, anticancer, antiallergic, anticoagulant, hepatoprotective, antiulcer, hypotensive, and hypocholesterolemic effects. In dentistry, curcumin had explored for its use in mouthwashes and intracanal medicaments. There are studies in which curcumin was used as pulpotomy medicament with high success rates.9

A total of 64 samples from children reporting to the Department of Pediatric and Preventive Dentistry were recruited for the study. Sample size was calculated using G power software with the help of mean and standard deviation obtained from literature.10 The study was carried out after obtaining provisional clearance certificate from the Institutional Review Board (SRMDC/IRB/2017/MDS/N0.801) and registered under the Clinical Trial Registry, India (CTRI/2018/11/016362).

Children aged 5- 9 years with no history of systemic illness and previous hospitalizations were chosen for the study. The teeth with irreversible pulpitis, restorable crown structure, and minimal periradicular changes, indicated for single visit pulpectomy, were included. Teeth showing signs of internal or external resorption were excluded from the study. Informed consent was obtained from the parents and guardians and samples were randomly assigned to one of the four groups by random number table method.

Group A: Curcumin and calcium hydroxide 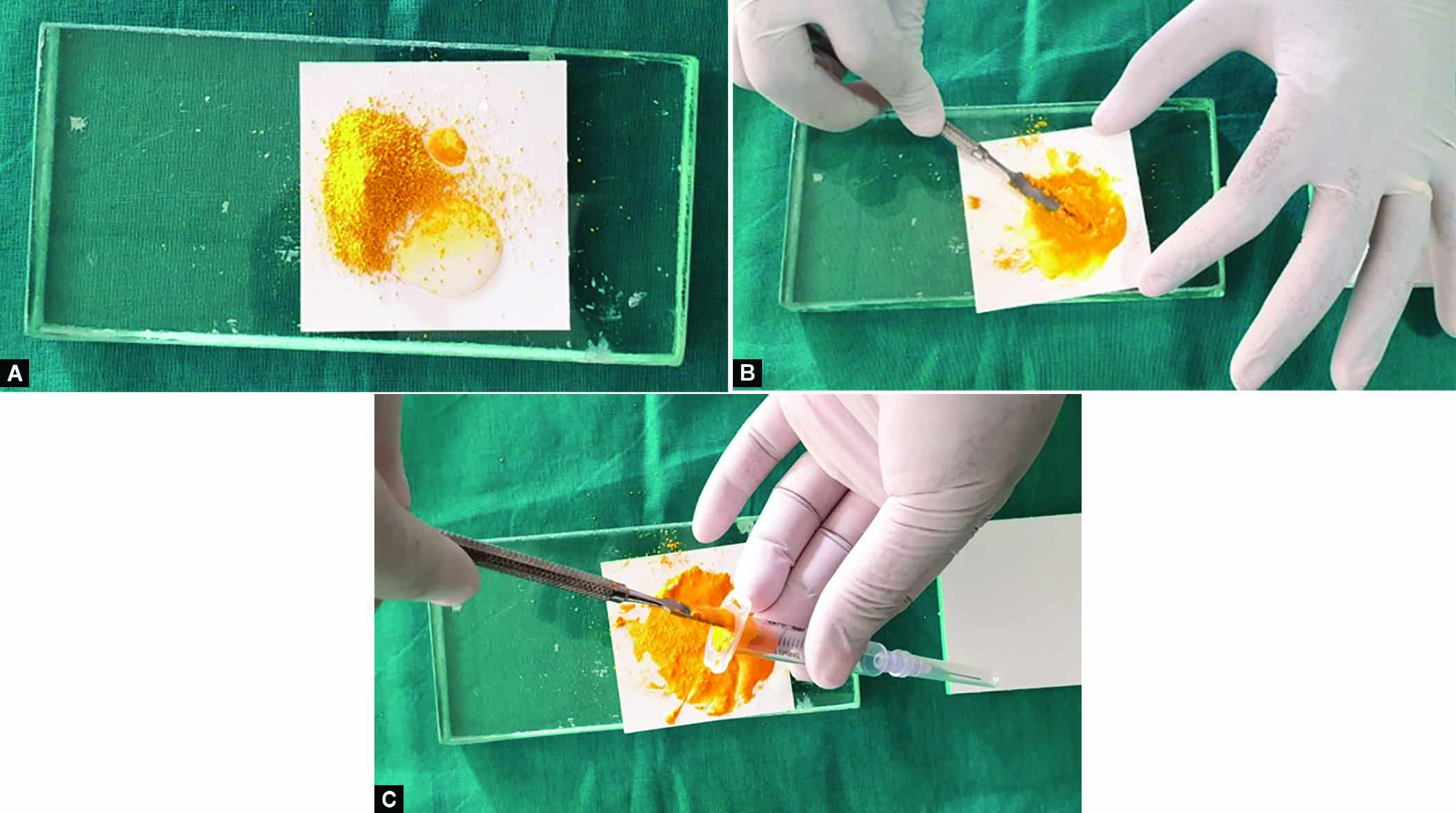 Curcumin paste: [Fig. 1] Curcumin paste was prepared by mixing 1 g of curcumin powder and few drops of propylene glycol using sterile spatula and glass slab in circular motions to get smooth paste. This paste was transferred to a sterile 2 mL disposable syringe for obturation.

Group A: Modified disposable injection technique (Fig. 2) was used as described by Nagarathna et al. in 2018.12 Rubber stopper was kept at 1 mm less than predetermined working length to the syringe loaded with curcumin and calcium hydroxide paste. The tip was placed inside the canals till the resistance was present. The material was pushed into the canals and simultaneously the tip was withdrawn from the canals. At the end, moist cotton pellet was used to push the material further into the canals.

Group B: Similar technique was employed with curcumin-loaded syringe.

Group C: Apexcal (Ivoclar Vivadent) was used to obturate the root canals. The paste was dispensed as instructed by the manufacturer. The tip was placed in the canals till there was resistance and the material was pushed into the canals.

Group D: Metapex (Meta Biomed) was used to obturate the root canals as per manufacturer’s instructions. All the canals were filled independently after which moist cotton pellet was used to push the material further into the canals.

Radiographs were taken to confirm the optimal fill of the obturation. All the samples were restored with Type II Glass ionomer restorative material (GC Gold Label 2 Glass Ionomer, GC Manufacturers, GC Corporation, Tokyo, Japan). If asymptomatic, the teeth were restored with stainless steel crown at 10 days. The patients were recalled at time intervals of 1 month, 3 months, and 6 months for review. The teeth were evaluated for clinical and radiographic success by an examiner who was not involved in the study using the following criteria as mentioned Subramanium P et al.10 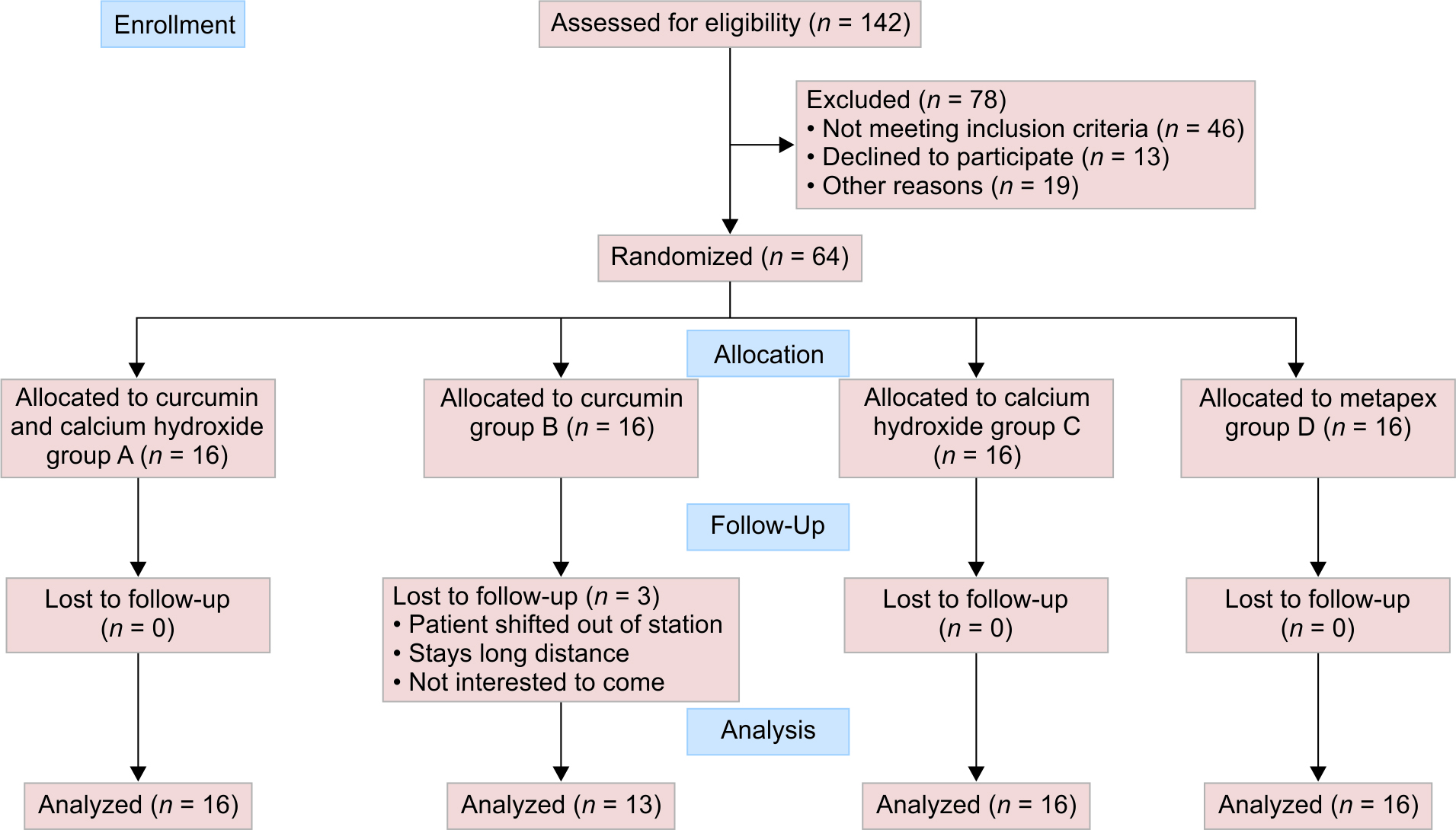 The data was analyzed with IBM SPSS statistics software 23.0 Version. To describe about the data, descriptive statistics such as frequency analysis and percentage analysis were used. Chi-square test was used to find the significance in categorical data. The probability value ≤0.05 was considered as significant.

The 1st month recalls had showed two samples from group A with pain on percussion and gingival swelling and were considered as failures. The success rate of group A was 87.5% at the end of 1 month while success rate of group B, C, and D remained at 76.9%, 100%, and 100%, respectively. The finding was not statistically significant with p value 0.07.

At 3 months recall, additionally two samples from group B reported with pain on percussion and gingival swelling and were considered as failures. The success rate of group B was 61.5% at the end of 3 months. Groups A, C, and D showed 87.5%, 100%, and 100%,respectively. The finding was highly statistically significant (p = 0.004).

Pulpectomy involves removal of the infected pulpal tissues, mechanical shaping of the primary root canals, and obturating them with an antibacterial resorbable material. The primary goal is complete elimination of microbes and microbial toxins from root canals and periradicular region and ensuring hermetic seal with obturation material.13 Owing to the complex root canal anatomy of primary molars, the choice of obturation material plays a vital role in the prognosis of teeth.14 In the recent days, naturally available herbs were continuously explored and there usage in dentistry is emerging. In this study, clinical and radiographic evaluation and comparison of four different obturation materials Metapex, calcium hydroxide, curcumin, and curcumin with calcium hydroxide were done.

It was single-blinded randomized control trial as patients were blinded about the allocation procedure among the groups. Examiners could not be blinded because of the variation in the radiopaque nature of the obturation materials used in the study.

In this study, Metapex group showed 100% success rate at the end of 6 months. These results were similar to that of studies done by Subramanium et al.10 and Mortazavi et al.15 In contrary to the results obtained by the present study, Metapex showed 90% success rate at the end of 9 months as reported by Ramar K16 et al. This variation of results might be because of faster resorption rate of Metapex than natural tooth in longer follow-up, which undermines the success of pulpectomy. As the present study was 6-month follow up study, all the samples obturated with Metapex were successful.

In the present study, calcium hydroxide group showed 93.8% success rate at the end of 6 months. Similar results were obtained by Nadkarni13 et al., Chawla17 et al., and Pinto18 et al. In these studies, calcium hydroxide obturation was done and samples were followed up for 6 and 18 months with similar success rates.

In the present study, curcumin group showed the least overall success rate of 61.5% and curcumin with calcium hydroxide group showed overall success rate of 81.3%. These results were supported by an in vitro antimicrobial assay done by Upadhyay11 et al. in 2015 in which highest amount of zone of inhibition against E. faecalis was noticed with by turmeric with calcium hydroxide followed by Metapex, calcium hydroxide, and last turmeric. Similar antimicrobial assay was reported by Prabhakar19 et al. in which curcumin showed 54% inhibition of E. faecalis .

In contrary to the results obtained in the present study, turmeric gel had showed 100% success rate in the clinical studies carried out by Hugar et al.20 and Purohit et al.21 in which turmeric was used as pulpotomy medicament. In those studies, turmeric showed 100% clinical success and 86.7% radiographic success rate at 6-month interval. The exact mechanism of action of turmeric is not known. But the use of turmeric in vital pulp and nonvital teeth had showed a huge difference in the clinical long-term success. In the present study, commercially available crystalline curcumin was obtained and used for obturation whereas in the previous studies of curcumin, naturally available turmeric was procured and grounded into powder and was used. This could be one of the reasons for the less success rate of curcumin.

Hence, in the present study, the use of calcium hydroxide as obturation material can be advocated for the future use, as it showed similar success rates compared to Metapex at 6-month follow-up. Owing to the anti-inflammatory properties of curcumin, its use as obturation needs further evaluation with longer follow-up and larger sample size.

The following conclusions can be drawn from the study.