Background: Cleaning and debriding the canals and preserving the shape of the canal without deformation is the primary goals of pulpectomy. Transportation is a critical endodontic iatrogenic fault that could cause a catastrophe. This study evaluated the canal centering ability and canal transportation caused by Kedo-S pediatric and Mtwo instruments, using a cone-beam computed tomography (CBCT).

Materials and methods: This in vitro study was performed on distal roots of 50 primary mandibular first molars. The teeth were scanned using CBCT and randomly divided into two groups. The canals were then prepared using either Kedo-S or Mtwo files ( n = 25). The instrumented canals were rescanned. The scanned volumes were sectioned at 2, 4, and 6 mm from cementoenamel junction (CEJ). Canal transportation (CT) and instrument centering ability were estimated and compared in both groups.

Results: The mean values for two study groups were compared. T -test was used to determine theP value. The Levene’s test was used to test the significance between two groups. The two groups showed similar results in terms of transportation and centering ability (P > 0.05).

Primary teeth with extensive caries involving pulp are indicated for a pulpectomy procedure. Traditionally pulpectomy was performed by stainless steel hand files.1 Several NiTi rotary files were later introduced with improved shaping abilities to reduce the risk of technical errors.2 The Mtwo system which consists of four instruments with variable tip sizes. It should be used without early coronal enlargement, suggested by the manufacturer, in single-length techniques.3-5 To perform an effective pulpectomy in primary teeth, it is mandatory to use rotary files with customized length, taper, and tip size that is suitable for root canal morphology of primary teeth.6 The Kedo-S rotary file (pediatric rotary system) is a file system with a length of 16 mm and the working area (cutting flutes) being 12 mm. These files have variable varying taper (4-8%).7 Cone-beam computed tomography is widely used for evaluating improvements in the root canal anatomy and visualization of maxillofacial hard tissues regions. Cone-beam computed tomography images provide submillimeter resolution with 15 times smaller than traditional scans with high quality and quick scanning time (10-70 seconds).8 Based on the literature search there is a lack of in vitro studies comparing Kedo-S with other NiTi rotary files. Evidence shows that Mtwo file maintains centering ability and shows better removal of debris from even in curved canals compared to other rotary systems.9,10 Hence this study is intended to evaluate the CT and centering ability of Kedo-S and Mtwo files using CBCT.

Selection and Preparation of Samples

Fifty extracted human mandibular primary first molars with minimum of 7 mm root length were collected and stored in formalin. The study was conducted in the Department of Pediatric and Preventive Dentistry, Sri Ramachandra Faculty of Dental Sciences, Sri Ramachandra Institute of Higher Education and Research with ethical approval from the Institutional Ethical Committee (CSP/17/JUN/59/217). Occupational Safety and Health Administration guidelines and regulations were used for storage and handling of teeth.

All the sample teeth had their crowns cut off horizontally at the level of the CEJ using sectioning disk. The sectioned roots were mounted in a wax block of a standardized dimension. Distal roots of the primary mandibular molar were selected as it is rounded, shorter, and taper more apically.11 Standard access cavities were made for all teeth with a diamond bur (BR 40, MANI, INC, Japan). Preoperative radiographs were taken and canal patency was assessed using 15 root canal instrument .All the samples teeth were then divided into two groups containing 25 teeth each (Flowchart 1). 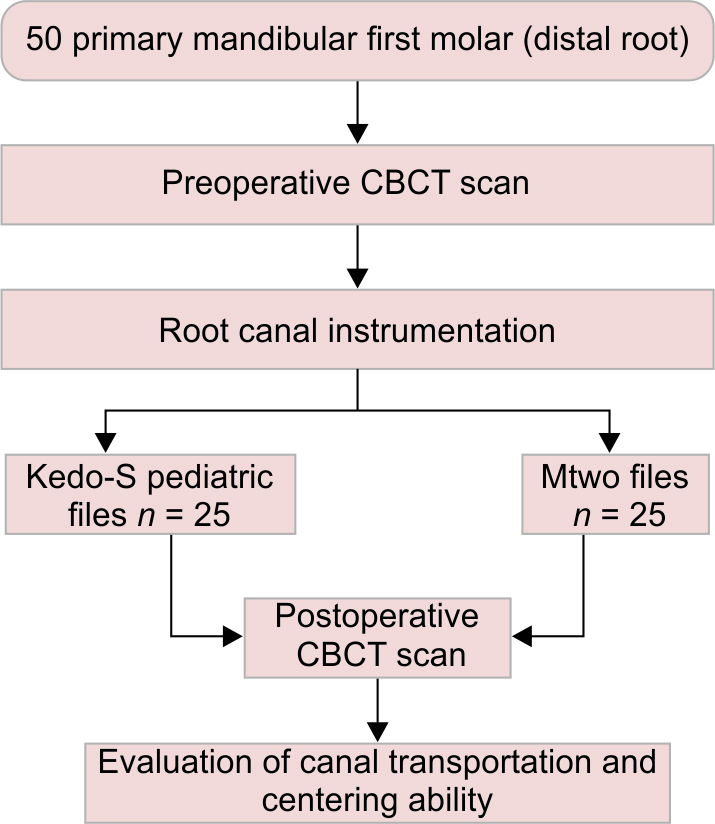 In group I, E1 Kedo-S files with X Smart Endodontic motor (Dentsply Maillefer, Switzerland) were used to prepare the canal with 300 rpm speed and torque of 2.2 N cm. Mtwo Basic Sequence NiTi rotary files (VDW, Munich, Germany) driven by an X Smart Endodontic motor (Dentsply Maillefer, Switzerland) at a speed of 300 rpm and a torque of 1.2 N cm were used for canal preparation in group II. The canals were prepared for the full length by single length technique without early coronal enlargement. Three Mtwo Basic sequence instruments (no.10 size to no. 20 size) were used in primary teeth.

Canals were irrigated with 3 mL of a 5.25% NaOCl solution (27-gauge needle). Glyde (Dentsply, Maillefer) was used for lubrication during instrumentation and after instrumentation; each instrument was changed after five canals.

Teeth were scanned before and after canal preparation with CBCT (Planmeca ProMax® 3D Mid) with a field of view = 80 mm × 80 mm and voxel size of 200 mm. The exposure time of 12 seconds and slice thickness of 0.4 mm with 90 kV and 10 mA was used. Romexis® digital imaging software, version 3.5.2 (Planmeca, Helsinki, Finland) were used to assess the CBCT images. The CEJ was taken as a reference point. The canal preparation was measured at three levels. 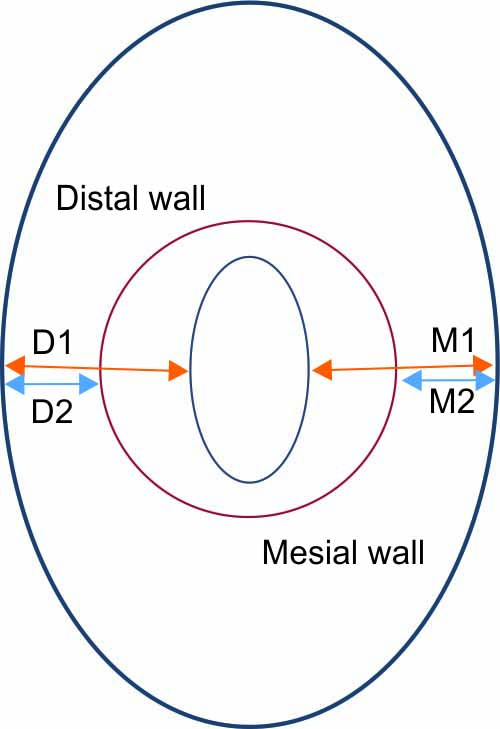 From the following equation, CT was assessed

A result equal to 1.0 demonstrated complete centralization ability ratio. This meant that the instrument had a lesser capacity to sustain itself in the central axis of the canal while this value was closer to zero.12

In this study, canal transportation and centering ability was examined at 2, 4, and 6 mm from CEJ. The mean CT for the mentioned diameters is listed in Table 1 and Figure 3. There was no considerable difference between the two systems, based on statistical evidence, in terms of canal transportation.

Figs 3A and B: Distribution of the amount of displacement in the two rotary systems: (A) Kedos-S; (B) Mtwo

The basic principles for biomechanical preparation in endodontic treatment are complete removal of vital tissue, necrotic remnants, debris, and infected dentin thereby render tissue repair and regeneration.13 The root canal geometry is different in primary teeth and hence it is important to assess the canal preparation using different instruments.14 The strength of the nickel-titanium (Ni-Ti) rotary systems was to uniformly, smoothly prepare the curved canals and maintain the shape with less instrument time and canal tapering than hand instruments.15 In the present study, teeth with a least amount 7 mm of root length were selected to simulate a clinical conditions. As it offers accurate three-dimensional (3D) observation, CBCT imaging has been used in measuring dentin thickness removal, canal curvature, transportation, and canal cantering ratio.16 Therefore, the objective of this research was to CBCT evaluation of the transportation and centering ability with rotary files of Kedo-S and Mtwo.

In our study, the Mtwo rotary system shows no transportation at 2, 4, and 6 ,mm. This finding was similar to the results of previous studies that evaluated the preparation of curved canals by using Mtwo files and other NiTi rotary files. It was reported that the Mtwo files conserved canal curvatures better than the K3, race,3,4 and Protaper instruments.17 Owing to the design of Mtwo files, fewer preparation errors have been reported.18 However, no significant difference was noted in this respect between the two systems. Both systems in all sections mostly recorded < 0.1 mm of canal transportation, which is within the clinically acceptable range given by Peters.19

The impediment of this investigation was smarter to compare the outcomes with a conventional stainless steel file. Notwithstanding, transportation has not conceded to the highest quality level.22 Since the lower transportation of NiTi files compared to that of stainless steel hand instruments is already established,23 we focused on recently presented newly introduced pediatric rotary with existing NiTi instruments as they were. Another limitation was that regardless of our endeavor to standardize the samples using the exclusion/inclusion criteria, extracted teeth cannot be completely standardized in terms of canal shapes and sizes.24,25

The quality purposes of our investigation are canal preparation was performed in natural teeth consequently, its outcomes could be better generalizable to the clinical practice. The procedures were performed by one operator (high reproducibility of results), utilizing software calculations (high precision), and utilization of CBCT.

Within the restrictions of this study, no difference was noted in canal transportation and centering ability of the rotary files used in this study. Thus, both systems can be used with minimum endangerment of procedural errors in root canal preparation. In terms of canal transportation and centering ability, Kedo-S file would be safer in primary teeth. However, further investigations are needed to evaluate the performance of Kedo-S pediatric files in the uneven walls of primary teeth with larger sample size.

The Kedo-S pediatric rotary file showed clinically appropriate transportation and centering ability that can be recognized as major innovations in pediatric endodontics.