Materials and methods: A sample of 20 immature teeth in subjects aged 8–13 years was selected for a revascularization procedure. The teeth were randomly distributed in two groups corresponding to the medicament received—TAP group (n = 10) and DAP group (n = 10). Microbial samples were collected using dry paper points at the beginning of treatment and thereafter every 3 weeks till sterile reading was obtained. Microbial samples were then sent to the microbiological lab for identification.

Results: A variety of opportunistic microbes were detected in samples obtained before placement of medicaments with no significant difference between the two medicament groups. The efficacy of TAP to eliminate microbes was lower in comparison to DAP after 3 weeks of placement of medicaments, whereas it was found to be more efficacious in comparison to DAP after 6 weeks and no significant difference (p> 0.05) was observed between the two groups.

Conclusion: Immature permanent teeth with pulp necrosis can achieve complete root development with regenerative endodontic technique. The use of antibiotic pastes including TAP and DAP can help achieve a successful outcome with thorough decontamination of the root canal.

Endodontic infection or traumatic injury to an immature permanent tooth can lead to cessation of tooth development with incomplete root formation having reduced root length and weak dentinal walls susceptible to fracture.1Regenerative endodontic therapy (RET) is a possible alternative to apexification in the treatment of teeth with open apex having pulp necrosis, as long as sufficient disinfection of root canals can be assured.2Revascularization of pulp is an established regenerative endodontic procedure for such immature pulpless teeth. However, for successful revascularization, disinfection of root canals is paramount as apical repair does not occur if inflamed or necrotic tissue is present.3

Most of the researchers have used either pure calcium hydroxide [Ca(OH)2] paste or triple antibiotic paste (TAP) as intracanal medicaments for achieving root canal disinfection. Ca(OH)2 has been used as an intracanal medicament in RET with successful results.4,5However, several researchers state that it may destroy cells with the potential to differentiate into new pulp cells due to its high alkalinity.6It may also induce calcification of the canal space, thus preventing the ingrowth of new pulp tissue with an odontogenic potential.4

Apart from achieving disinfection for causing apical repair, it is also relevant to know the commonly isolated microbial pathogens infesting the root canals. There is a paucity of data on microbial colonization of necrotic root canals with developing roots that suffered trauma. To our knowledge, there are no in vivo microbiological studies that compare the efficacy of the TAP and DAP group to eliminate pathogens from root canals. The present study aimed to compare the antimicrobial activity of TAP and DAP for root canal disinfection before the revascularization procedure.

This pilot study was a longitudinal experimental study conducted during the year 2018 to 2020 in the Department of Pedodontics and Preventive Dentistry, Maulana Azad Institute of Dental Sciences, New Delhi. Approval from the Ethical committee of the institution was taken before the commencement of the study. Written informed consent was obtained from the parents of all the subjects. A sample of 20 teeth in subjects without any systemic disease, aged 8–13 years was selected for revascularization procedure as per the inclusion criteria (immature, pulpless permanent anterior teeth with open apex negative to pulp vitality testing).

The teeth were anesthetized using 2% lignocaine followed by isolation using rubber dam. Access cavity preparation was done and root canals were flushed with distilled water (5 mL). The microbial sample was collected from the root canal using sterile paper point and sent to the microbiology lab for further microbiological evaluation.

Teeth were allocated randomly into one of the groups corresponding to the intracanal medicament being used. In the TAP group (n = 10), a mixture of three antibiotics (ciprofloxacin 250 mg, metronidazole 400 mg, and minocycline 50 mg) as ascribed by Hoshino et al.13was used, whereas in the DAP group (n = 10), only ciprofloxacin and metronidazole antibiotics were used.

The medicament was removed after 3 weeks and another sample from the root canal was taken. If the sample was not sterile after 3 weeks, the same intracanal medicament was replaced and kept for another 3 weeks in the root canal. If the reading was sterile, completion of revascularization procedure was done followed by restoration with mineral trioxide aggregate (MTA) and glass ionomer cement (GIC) with a final composite build up.

The clinical and radiological signs of all the teeth in the TAP group and the DAP group were recorded after 3 and 6 weeks of placement of medicaments based on clinical considerations for regenerative procedures given by the American Association of Endodontists (AAE).14

Microbiological analysis was done using the sample collected from the root canal using sterile paper point. The paper point was immersed in the brain heart infusion broth and incubated at 37°C for 24 hours. Further inoculation was done on MacConkey agar, which was again incubated at 37°C for 24 hours. The results read as follows (Table 1 and Fig. 1). 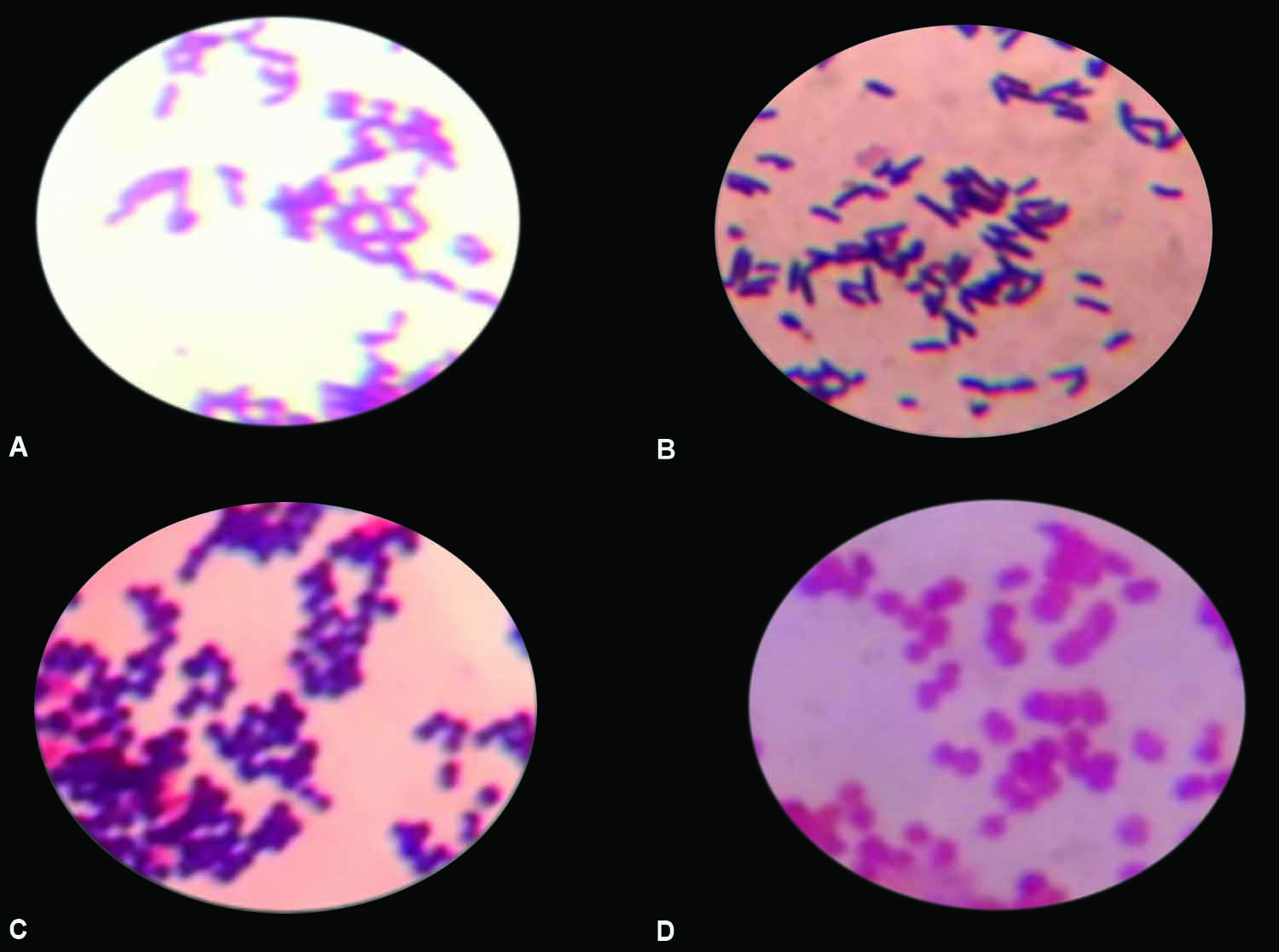 Figs 1A to D: Gram’s staining of microbial cultures obtained from samples

Clinical and radiographic follow-up of all the subjects was done at 3, 6, 9, and 12 months intervals (Fig. 2).

The collected data were analyzed using the Statistical Package for the Social Science-21 (SPSS Inc., Chicago, IL, USA). A Chi-square test was used and significance was predetermined at a probability value of 0.05 or less.

A total sample of 20 teeth in 13 subjects, between the age of 8 years and 13 years, was selected for this study. The mean age of patients was 9.47±1.519 years with the sample comprising of five males and eight females. The teeth were allocated randomly into either the TAP group or DAP group comprising of 10 teeth each. Drop out of two teeth belonging to the DAP group was seen after initial microbiological analysis, before placement of the medicament.

The comparison of esthetics, patient, and operator acceptance of clinical appearance of teeth between TAP group and DAP group was done. All the teeth in the TAP group depicted inferior esthetics and hence, were low inpatient and operator acceptance when compared with teeth in the DAP group, with the difference being statistically significant (p < 0.05).

Treatment of immature permanent teeth having pulp necrosis either due to trauma or endodontic infection has always remained a challenge with revascularization being a viable treatment option. The key advantages of revascularization over the conventional apexification technique include the continuation of root development and strengthening of the root structure. The AAE recognizes the tremendous future potential in regenerative endodontics and has introduced a specific code (D3354) to report pulpal regeneration procedures.

Revascularization mainly relies on the disinfection of the root canal and placement of a suitable matrix for tissue growth along with an impermeable coronal seal. Elimination of harmful microorganisms and necrotic tissue from the infected root canal using chemical debridement and minimal or no instrumentation is an important requisite of successful revascularization and other regenerative techniques. American Association of Endodontists advocates copious gentle irrigation with a low concentration of sodium hypochlorite [1.5% (20 mL/canal, 5 minutes)] followed by irrigation with saline or EDTA (20 mL/canal, 5 minutes). The intracanal medicaments advocated include calcium hydroxide, TAP, and DAP [excluding minocycline or substituting minocycline with other antibiotics (clindamycin, amoxicillin, cefaclor)]. Multipotent dental pulp stem cells along with stem cells from apical papilla being resistant to necrosis/infection comprise a major source of cells allowing the process of revascularization.

A variety of irrigating solutions and intracanal medicaments have been used in previous studies to achieve satisfactory decontamination before revascularization8,15,16 with a paucity of data comparing the efficacy of TAP with DAP. Hence, this study aimed to compare the antimicrobial activity of TAP and DAP for root canal disinfection before revascularization procedure.

In this study, a variety of opportunistic microbes were detected in samples obtained before placement of medicaments with no statistically significant difference between the two medicament groups. A majority of teeth (30% teeth allocated to TAP group and 40% teeth in DAP group) depicted colonies of facultative anaerobic gram-positive non-enterococcal group D streptococci with only 10% (n = 1) teeth in the TAP group depicting colonies of E. faecalis. Other facultative anaerobic gram-positive cocci included S. aureus (10% teeth in TAP group) and coagulase-negative Staphylococcus species (10% teeth in the TAP group and 20% in the DAP group). Colonies of facultative anaerobic gram-negative organisms including Klebsiella pnuemoniae were seen in 20% (n = 2) teeth allocated to the TAP group. Aerobic organisms were also detected which included species of Acinetobacter (10% teeth in DAP group) and Diphtheroids(another 10% teeth in the DAP group). The profile of microbes as seen in this study was similar to those seen in intact teeth with necrotic pulp.17-19

In the present study, the efficacy of TAP to eliminate microbes was lower in comparison to DAP after 3 weeks of placement of medicaments, whereas it was found to be more efficacious in comparison to DAP after 6 weeks with the results being statistically insignificant (p > 0.05) between the two groups. Complete elimination of microbes in all the teeth belonging to the TAP group was seen at 6 weeks and in DAP after 9 weeks of placement of medicament. Triple antibiotic paste, a combination of three antibiotics, highly efficacious against gram-negative, gram-positive, and anaerobic bacteria.20Metronidazole, having a nitroimidazole component, is considered toxic to anaerobes and possesses effective antimicrobial action against anaerobic cocci as well as gram-negative and gram-positive bacilli.20 Ciprofloxacin, a second- generation fluoroquinolone, has a rapid bactericidal action against gram-negative bacteria, with limited activity against gram-positive organisms.20It is particularly effective against K. pneumoniae, E. faecalis, methicillin-sensitive S. aureus, and Streptococcuspyogenes. As several anaerobic bacteria are resistant to ciprofloxacin, it is most often used with metronidazole for treating mixed infections. Minocycline has a bacteriostatic nature and shows broad-spectrum activity against both Gram staining bacteria.20

The major drawback of using TAP is discoloration of the tooth due to minocycline antibiotics.20,21Replacement of minocycline with other antibiotics such as amoxicillin and clindamycin has also led to discoloration either immediately after treatment or after a certain period.18The use of DAP is therefore advocated which excludes minocycline eliminating the chances of tooth discoloration. In vitro studies conducted in the past have revealed similar efficacy of TAP and DAP, specifically against E. faecalis with a paucity of data pertaining to in vivo comparisons between TAP and DAP.12,15

In the current study, colonies of S. aureus, coagulase-negative Staphylococcus, non-enterococcal group IV streptococci, and Candida were found to be present after 3 and 6 weeks of placement of medicaments. This can be explained on the basis that these microorganisms are relatively resistant and are detected in persistent root canal infections.17

In the present study, none of the teeth in the TAP and DAP group presented with any clinical signs of spontaneous pain, pain on percussion or palpation, fistula or abscess, and mobility after 3 weeks of placement of medicaments. Radiographically, 20% (n = 2) teeth in the TAP group and 37.5% (n = 3) teeth in the DAP group showed no signs of resolution of periapical radiolucency after 3 weeks of placement of medicament which subsequently reduced after 6 weeks in both the groups.

In the current study, discoloration of the crown was observed in all the teeth in the TAP group leading to inferior esthetics and poor patient and operator acceptance when compared with the DAP group. Discoloration with TAP is due to minocycline antibiotic, which binds to calcium ions in dentin forming insoluble complexes resulting in discoloration.21Similar finding has been observed in various studies conducted in the past with TAP as intracanal medicament.21-23

Immature permanent teeth with pulpal necrosis can achieve continued root development with regenerative endodontic technique. The key to this technique is complete disinfection of the root canal with chemical debridement and minimal instrumentation and is majorly dependent on the differentiation potential of residual dental pulp stem cells and stem cells from apical papilla. The use of antibiotic pastes including TAP and DAP can help achieve a successful outcome with thorough decontamination of the root canal. Both the medicaments demonstrate similar antimicrobial efficacy with DAP having the advantage of minimizing the chances of tooth discoloration. A paucity of in vivostudies utilizing TAP and DAP as potential intracanal medicaments necessitate conducting such studies to compare different parameters of both the medicaments.