Conclusion: This modified cleaning and shaping technique can be considered as alternative to conventional instrumentation technique, as it improves quality of obturation and decreases the number of voids.

Study design: This is a randomized, clinical trial study approved by the Ethical Committee of the Kamineni Institute of Dental Sciences, Narketpally (Ethical committee number–KIDS/IEC/PEDO/18/7)

Patient selection: The participants were recruited from the walk-in patients of Department of Pedodontics and Preventive Dentistry, Kamineni Institute of Dental Sciences, Narketpally. After conducting a pilot study, a sample of 92 canals in each group was finalized. Within the duration of 6 months, a total of 76 teeth (32 maxillary and 44 mandibular) from 50 healthy and cooperative children were included in the study. Parental informed consent was obtained prior to the study.

A total of 76 teeth with 32 maxillary (96 canals) and 44 mandibular (88 canals) were randomly divided into two groups:

Group I: To standardize the study, pulpectomy procedures were carried out by single operator in both the groups. Preoperative intraoral periapical radiograph was taken for each tooth. The tooth was anesthetized and isolated with rubber dam. The access openings of pulp chamber in primary teeth were done with great care to avoid perforation of pulpal floor. The entire carious tooth structure was removed and access was gained by using #2 round bur. Endo Z bur (Dentsply, Switzerland) was used to remove the entire roof of the pulp chamber to provide straight line access to the canals. The canals were negotiated using endodontic files and radicular pulp tissue was removed with barbed broaches and H files. The working length was established 1–2 mm short of radiographic apex length to avoid overextension. The root canals were instrumented till 30 size k file. The root canals were thoroughly irrigated with 2.5% sodium hypochlorite and saline solution was used as the last irrigating medium. The root canals were thoroughly dried using absorbent paper points by inserting them 1 mm short of radiographic apex and later a homogenous mixture of Zinc Oxide Eugenol (ZOE) was used for filling the root canals.

Group II: The same pulpectomy procedure was carried out except the difference was final coronal shaping was done with hand protaper Sx file after conventional instrumentation with 30 size k file followed by ZOE obturation.

Two blinded, calibrated observers assessed the quality of the filled canals by measuring the distance of the ZOE filling from the apex (mm) by using a special ruler. The quality of root canal filling was evaluated as: underfilling, if the canal was filled >2 mm short of apex; optimal filling, if the canal was filled at the radiographic apex or up to 2 .mm short of radiographic apex, and overfilling, presence of material beyond the root apex.8

The teeth were examined radiographically by both evaluators independently and then reviewed together if there was any disagreement. The treatment was judged to be successful when the teeth showed optimal filling with no voids. 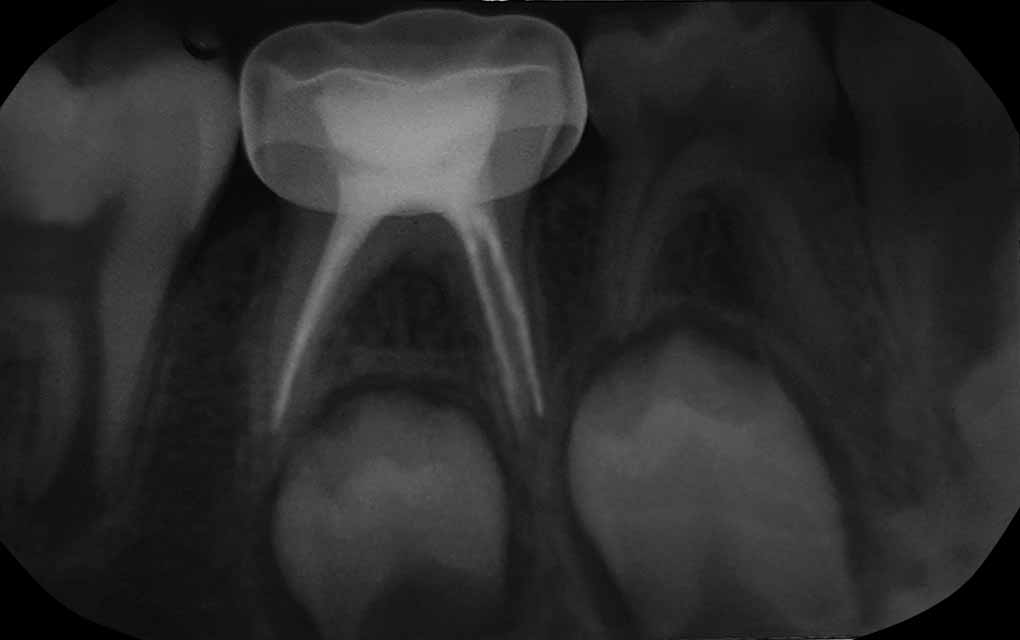 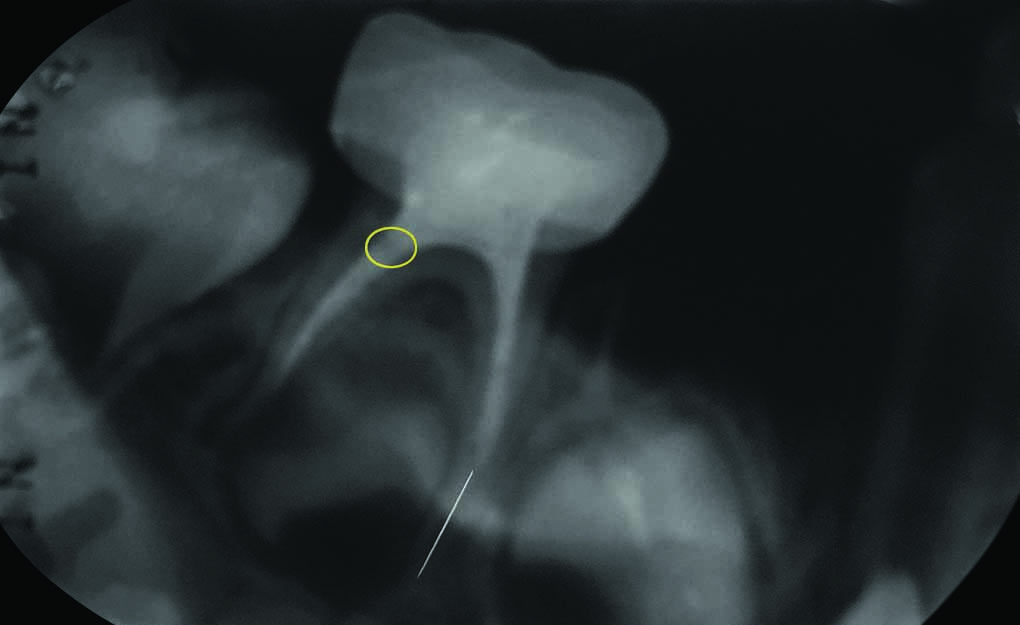 Primary root canals are more ribbon-like and have tortuous configurations making pulp extirpation difficult.9,10 The primary objectives of cleaning and shaping the root canal system were to remove soft and hard tissue containing bacteria, providing a path for irrigants to the apical third, supplying space for medicaments and subsequent obturation, retaining the integrity of radicular structure.11 Obturation of the root canal must be hermetic to ensure eradication of microorganisms and prevent their regrowth to avoid subsequent periapical diseases.2 Root canal instrumentation is performed with files, reamers, sonic instruments, and recently with rotary instruments.12 The use of Nickel Titanium (NiTi) rotary files in primary teeth root canals was first described by Barr et al.6 These NiTi alloy instruments inherent flexibility that allows the files to preserve the original anatomy of curved canals, especially in primary teeth and reduce the chances of procedural errors.13 Even though the use of the rotary instrumentation technique enhances the quality of obturation, the disadvantages of NiTi rotary files are high cost, the need for training to learn the technique, cyclic fatigue, tendency to fracture,14 and inefficiency in cleaning the isthmus and fins of primary teeth due to the centering of rotary instruments in the root canal.15

According to Barbizam JV,16 the conventional technique was more efficient in cleaning mesial-distal flattened root canals than the rotary technique. Mokhtari et al.17 in their study concluded that there was no significant difference in quality of obturation when compared between conventional and rotary instrumentation in primary teeth. In contrary, there are studies which proposed that rotary technique is more efficient in providing good quality of obturation than manual instrumentation technique.5,15

In this study, root canals obturated with conventional technique showed more number of underfilled canals and presence of voids because because it was difficult to acquire conical shape of root canal preparation with the standard conventional k file technique.

In modified conventional root canal shaping technique, when Sx is used as last instrumenting file, the conical shape of root canal is achieved facilitating better obturation. The gradual tapering of Sx file can selectively remove dentin in a safe way and can reach the entire length of the root canal, causing little or no displacement, particularly in the apical region. Sx file eliminates the constriction of initial part of canal, thus making the easier penetration of instruments and irrigation solutions till the apex.18 This in turn helps the obturating material to flow easily till the apical part of canal thereby improves the quality of obturation and reduces the number of voids. This might be the reason in this study, modified root canal shaping technique showed least number of underfilled canals and less number of presence of voids compared to conventional technique.

The successful outcome of an obturated primary tooth is predicted by the quality of obturation of canals. This can be achieved by many rotary systems specifically tailored for primary teeth. But, not every practicing dentist or pediatric dentist will have access to these rotary systems all the time and they may not be economical for certain patients. This modified conventional shaping technique was economical and easy to practice, as it does not require any training in learning the technique. With this simple moderation, the quality of obturation will be significantly enhanced compared to conventional technique. In current postgraduate curriculum in various parts of world, rotary instrumentation was not followed during examination. So, this modified protocol will help postgraduates to acquire a good conical shape and improves the density of obturation especially in curved and difficult canals.

This modified cleaning and shaping technique can be considered as substitute over conventional instrumentation technique, as it gives a good conical shape to root canals. This technique improves density of obturation especially in curved and difficult canals, is easy to practice, and is cost effective.