Treatment Outcomes of Pulpotomy with Propolis in Comparison with MTA in Human Primary Molars: A 24-month Follow-up Randomized Controlled Trial

Aim and objective: To evaluate the clinical efficacy of propolis as pulpotomy medicament in human primary molars.

Materials and methods: This randomized controlled trial is a two-arm, parallel group study with blinded outcome assessment. The study included a total of 60 primary molars that require pulpotomy treatment in 4- 8-year old children. Teeth were assigned to two groups randomly: Propolis (Test group); Mineral trioxide aggregate (MTA) (Control group). All the pulpotomized teeth were given stainless steel crowns and the teeth were evaluated clinically and radiographically at 6, 12, and 24 months to grade them as either success or failure. Chi-square test was employed to analyze the data.

Clinical significance: Biocompatible materials with regenerative potential have drawn the momentum in vital pulp therapy. In this regard, MTA has been emerged as most successful material, but its high cost has limited its use. Hence, there is an absolute need of cost-effective pulpotomy material with regenerative potential. This study provides an evidence that propolis has clinically acceptable success rate as pulpotomy medicament. Considering its low cost and ready availability, it can be recommended as a cost-effective alternative for primary teeth pulpotomy.

In pediatric dentistry, pulpal infection is the most commonly encountered treatment challenge. Pulpotomy is the indicated treatment if infection is confined to the coronal pulp tissue and radicular pulp is healthy. This procedure maintains the radicular pulp’s vitality and allows the tooth to be retained in the arch. The outcome of pulpotomy is mostly determined by the medicament used.

For the past 70 years, formocresol has been the most preferred pulpotomy medicament for primary molars. However, due to its undesirable consequences such as mutagenicity and carcinogenicity, the usage of formocresol has been questioned.1 Owing to these concerns, various other medicaments such as glutaraldehyde, ferric sulfate, mineral trioxide aggregate as well as methods such as electrosurgery and laser were tested and have shown a varied clinical success.

The paradigm shift from mere preservation to regeneration in endodontics has promoted MTA as an alternative vital pulp therapy medicament. MTA has been successfully used for permanent tooth apexogenesis and apexification treatments, root perforation repairs, and other procedures. MTA is also being popularly used in primary teeth as pulpotomy medicament and has shown promising results. However, high cost and poor handling characteristics have limited its use.

Nowadays, use of natural plant products for therapeutic purposes, the phytotherapy, is gaining popularity. Propolis is a bee hive product that honey bees produce from the substances gathered from tree buds, leaf buds, and plant resinous secretions. It has potent antibacterial,2 anti-inflammatory,3 and tissue-regenerative properties.4,5 Based on the literature evidence of these beneficial properties, we tested propolis as pulpotomy medicament in comparison with MTA in human primary molars.

This randomized controlled trial is a two-arm, parallel group study with blinded outcome assessment and 1:1 allocation. The study was approved by Institutional Ethical Committee (VDC/IEC/2014-17) and is enlisted in Clinical trials registry-India (CTRI/2018/04/013352). The experimental protocol adhered to the ethical standards of the human experimentation, Declaration of Helsinki.

The study comprised 60 primary molars indicated for pulpotomy in 4- 8-year old children attending out-patient department of Pediatric Dentistry and the participants were followed up for 24 months.

Primary molars with deep caries lesion without spontaneous or persistent pain, teeth with at least two-thirds of root length intact, and restorable with stainless steel crowns in children who are nonallergic to propolis were included in the study. Teeth exhibiting the signs and symptoms of chronic infection such as sinus tract, swelling and mobility, teeth showing radiographic evidence of pathologic root resorption, inter-radicular bone loss, periapical pathology, and calcifications in the canal were excluded.

The success of propolis and MTA pulpotomies in primary molars at 6, 12, and 24 months of follow-up is the primary outcome.

With a 1:1 allocation and block randomization of block sizes 2 and 4, a randomization sequence was generated using Excel, 2007 by an independent doctor. Allocation details were noted on the cards and sealed in opaque envelopes, which were then numbered, so that the investigator was concealed about the allocation. Generation of random allocation sequence, enrollment, and assignment of participants to intervention were done by an independent doctor who is not involved in the clinical trial.

Participants, outcome assessor, and data analyst were blinded to the sample distribution, whereas the operator could not be blinded because of the difference in the physical form of interventions, one is liquid and the other one is powder and liquid.

After obtaining the written informed consent from the parents, 60 teeth, 30 in each group, were assigned randomly to the test group (propolis) or the control group (MTA). Children allocated to test group (propolis) were subjected to patch test to rule out any allergic tendencies to propolis. After confirming that patient is nonallergic, pulpotomy procedure was carried out under strict aseptic conditions.

In both the groups, anesthesia was given to the teeth and rubber dam was applied for isolation. After removing all the carious debris, a number 4 round bur was used with high-speed handpiece and water spray to get access to the pulp chamber. After that, the pulp chamber was deroofed with a number 330 bur, pulp tissue in the coronal part was scooped out with a sharp spoon excavator, and then saline was flushed to clear off the debris. After achieving hemostasis, respective pulpotomy agent was placed.

In test group, cotton pellet soaked in propolis (Brazilian green propolis alcohol free 60%, Uniflora Health foods, Brazil) was applied on the remaining radicular pulp stumps for 5 minutes, observed for hemostasis, and then restored with glass-ionomer cement (GIC). In control group, MTA (Angelus white, Angelus Industria de Produtos Odontologicos Ltd, Brazil) mixed in 3:1 proportion was placed over the exposed pulp and then restored with GIC. All the treated teeth were given stainless steel crowns and the children were instructed to inform if there is any pain or swelling. For postoperative evaluation, the patients were followed up at 6, 12, and 24 months of interval.

In the recall visits, all the teeth were evaluated to grade them as either success or failure depending on the clinical and radiographic outcomes. The treatment outcome was considered as success when there was no pain, tenderness, sinus opening, and mobility clinically, and no signs of widening of periodontal ligament space, periapical or inter-radicular radiolucency, and internal or external pathological root resorptions radiographically. Any tooth which showed any signs or symptoms of failure was treated with pulpectomy. All the follow-up evaluations were done by a blinded clinician.

The collected data was statistically analyzed using nonparametric Chi-square test in IBM SPSS Statistics, version 21 (IBM Corp., Armonk, New York, USA). For all the tests, a ˝p˝ value of 0.05 or less was set for statistical significance.

Participation of subjects through the trial is illustrated in CONSORT flow diagram (Flowchart 1). Out of 60 children, 30 children were randomly assigned to propolis group and 30 to MTA group. All the children received the interventions without any losses or exclusions. Participants were on average 6 years old (range: 4- 8 years). There were almost similar numbers of boys and girls. At the 6-month evaluation period, one boy in the MTA group did not turn up for follow-up, as the family migrated to other state. Hence, the final sample consisted of 59 children. 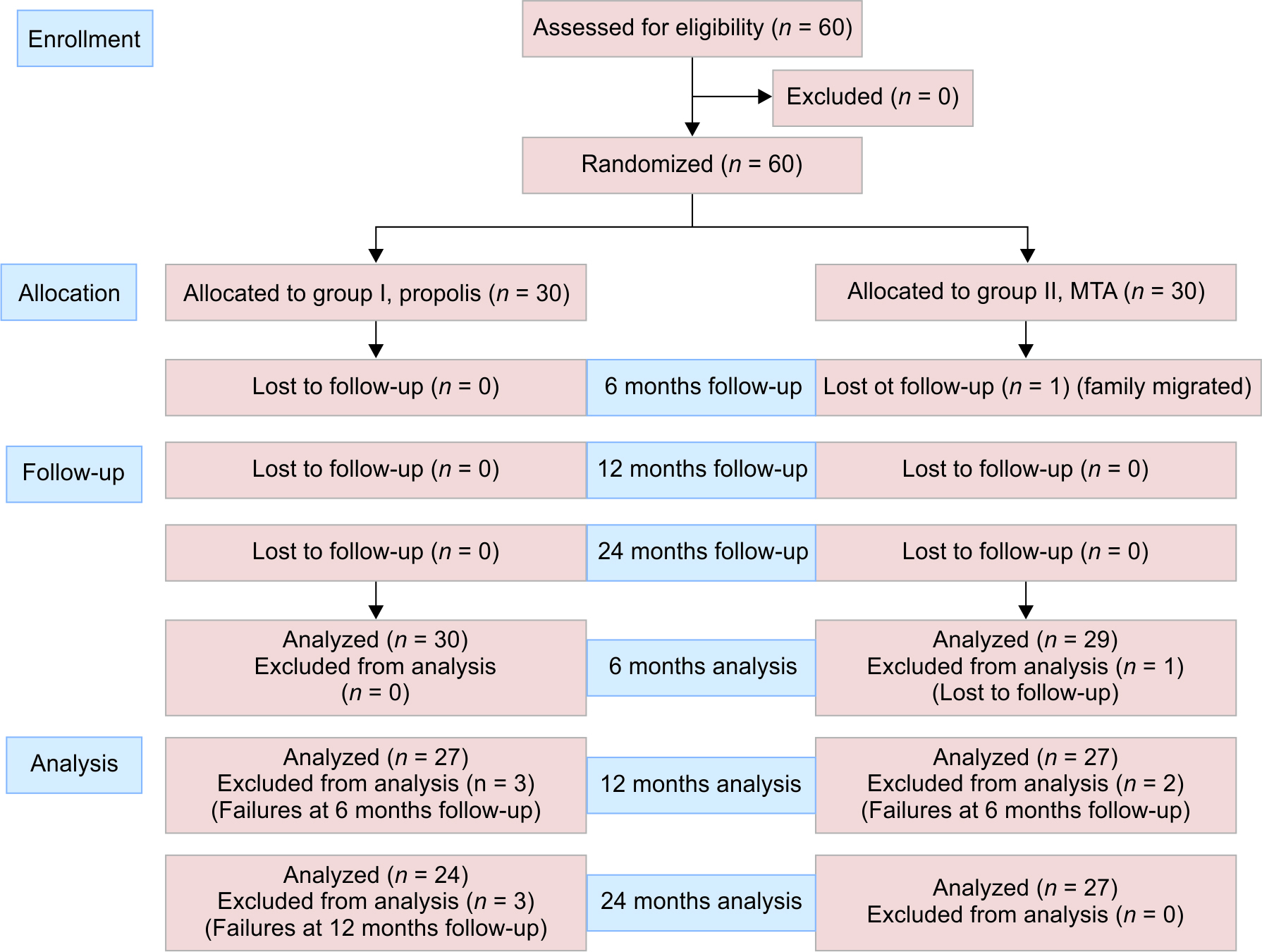 At 6 months of follow-up, 59 teeth were evaluated. Three failures were seen in propolis group, whereas MTA group has shown two failures. Propolis and MTA have demonstrated a success rate of 90% (n = 27) and 93.1% (n = 27) respectively and this difference was of no statistical significance (p = 0.669) (Table 1).

Finally at 24 months, no further failures were reported in either of the groups and the success rate remained same as 12 months of interval (Table 1).

Radiographs of cases treated with propolis and MTA are illustrated in Figures 1 and 2 respectively which show no pathological signs at any of the follow-up intervals.

Primary teeth with coronally inflamed pulps can be managed with pulpotomy, a vital pulp therapy technique. Pulpotomy in the primary dentition is classified into three categories: devitalization; preservation; and regeneration.8 Among these three lines, preservation and regeneration are the most desirable approaches to preserve the vitality of radicular pulp.

Biocompatible materials with regenerative potential have drawn the momentum in vital pulp therapy. MTA has emerged as most popular material because of its well-accepted biocompatibility, quality biological seal, and tissue regenerative properties. Several studies have tested MTA as pulpotomy medicament in primary molars and reported high success rates when compared to conventional pulpotomy medicaments.6,7,9,10 Hence, in the present study, we preferred MTA as control group.

Propolis is a natural, resinous bee hive extract, and has gained the attention of researchers in recent times because of its antibacterial, anti-inflammatory, antioxidant, and tissue-regenerative properties. Propolis has wide range of applications in medicine and dentistry. In dentistry, it has been tested for root canal irrigation,11 direct and indirect pulp capping,4,12 mouth rinsing,13 and as storage medium for avulsed tooth.14 Owing to the beneficial properties of propolis, it has been considered as test group.

MTA had a high success rate of 93.1% at 24 months of follow-up in the current trial and similar success rates ranging from 94 to 100% at 12- 74 months of follow-up period have been reported by various authors.6,7,9,10 The high success rate of MTA is perhaps as a result of its biocompatibility,15 excellent sealing ability,16,17 alkalinity,15 and its unique ability to induce tissue regeneration when it is placed on the dental pulp.18,19 Although high success rates are reported with MTA, the factors limiting the routine use of MTA are its high cost, technique sensitivity of the material, and difficulty in re-entry into the canal in cases of pulp canal obliteration in teeth indicated for further pulp therapy.

The success of propolis could be attributed to its antibacterial,2 anti-inflammatory properties3 as well as its biocompatibility,23 ability of dentin bridge formation4,5 and wound healing augmentation.24 Several studies have demonstrated the significant antibacterial efficacy of propolis against E. faecalis , S. mutans, and Lactobacillus .11,25,26 Antimicrobial activity of propolis is due to its components flavonoids, cinnamic acid, caffeic acid, and benzoic acid, which perhaps act on the microbial membrane, inflicting structural, and functional damage.27

It has been reported that propolis inhibits inflammation by regulating cytokines and inflammatory mediators.28 A significant anti-inflammatory effect of Albanian propolis has been demonstrated after 3 months of pulpotomy in piglets.29 Propolis demonstrated superior biocompatibility and cell viability similar to MTA.23 Propolis also enhances wound healing of the underlying radicular tissue at the pulpotomized site. Constituents of propolis increase the production of transforming growth factor-ß, which stimulates the production of collagen by cells.30

Propolis also favors the hard tissue dentin bridge formation when used for direct pulp capping and pulpotomy. Studies have demonstrated the formation of continuous and thicker dentine bridge along with the adjoining well aligned odontoblast-like cell layer.4,5 Meto et al. demonstrated significantly greater regenerative effect and dentin barrier formation with Albanian propolis after 3 months of pulpotomy in piglets.29 An immune-histochemical evaluation of Fibronectin and Tenascin, the markers of dentinogenesis, following direct pulp capping with propolis in dog’s teeth found an increase in the expression of fibronectin and tenascin from 7 to 30 days interval, which suggests the hard tissue barrier formation.31

In the present study, alcohol-free propolis has demonstrated a clinically acceptable success rate as pulpotomy medicament both in short term and long term. Considering its low cost and ready availability, it can be recommended as a pulpotomy medicament for primary teeth. This study gives a further scope to carry out clinical trials with large sample size to authenticate the success of propolis.

Propolis has demonstrated a clinically acceptable success rate comparable to MTA as pulpotomy medicament in primary teeth and hence it could be considered as cost-effective option for primary teeth pulpotomy.