Congenital Epulis of the Newborn: A Case Report and Literature Review

Congenital epulis is a rare benign lesion of new-born and occurs mostly as a single tumor. A new-born infant with congenital epulis is a striking sight for both parents and health care professionals involved in neonatal care. The tumor has a female predilection with the female to male ratio being 10:1. These tumors in the infant’s mouth are remarkably large, occupying much of the oral cavity and posing a risk of airway obstruction and it can interfere with the feeding. Although the clinical presentation of the congenital tumor is rather distressing, owing to its size and aggressive appearance, it is very much necessary that the attending pediatricians, pediatric surgeon be cognizant of the nature of this rare yet benign congenital tumor. The purpose of this article is to present a case report documenting the clinical presentation and management of Congenital Epulis on the anterior maxillary alveolus in a three-day old female patient.

The term epulis derives from the Greek word meaning “on the gum” or “gum boil” and has been unfortunately used for a variety of benign tumors and tumor-like conditions having dissimilar structures and histogenesis.4,5 Congenital epulis is usually presents at birth as a prominent palpable mass arising from the gingival mucosa of the maxilla or mandible.2 There is a marked female predominance of 10:1.4 The incidence rates are found to be 0.0006% at a center in wales and epulis accounted for 10.8% of all the oral lesions in a center in India.5

The lesions occur sporadically, and no familial predispositions are noted. Usually, congenital epulis unveil as a solitary lesion. Although, multiple lesions were noted in 10% of the cases.4 The lesion clinically is presented in the form of pedunculated, non-ulcerated pink mass of various sizes from few mm to 9 cm in diameter.1,6

Diagnosis is generally based on clinical grounds alone.7 Few cases of spontaneous regression have also been reported.8 Congenital Epulis can impede feeding and respiration and hence, the recommended treatment is surgical excision under local or general anesthesia. To reduce the risk of damage to the underlying alveolar bone and developing tooth buds minimally invasive surgery should be done.9

The exact etiology of Congenital epulis is not known, but numerous theories have been postulated. This case report documents the presentation and surgical management of 3 year old female baby with congenital epulis of the right maxillary alveolar ridge (Fig 1). 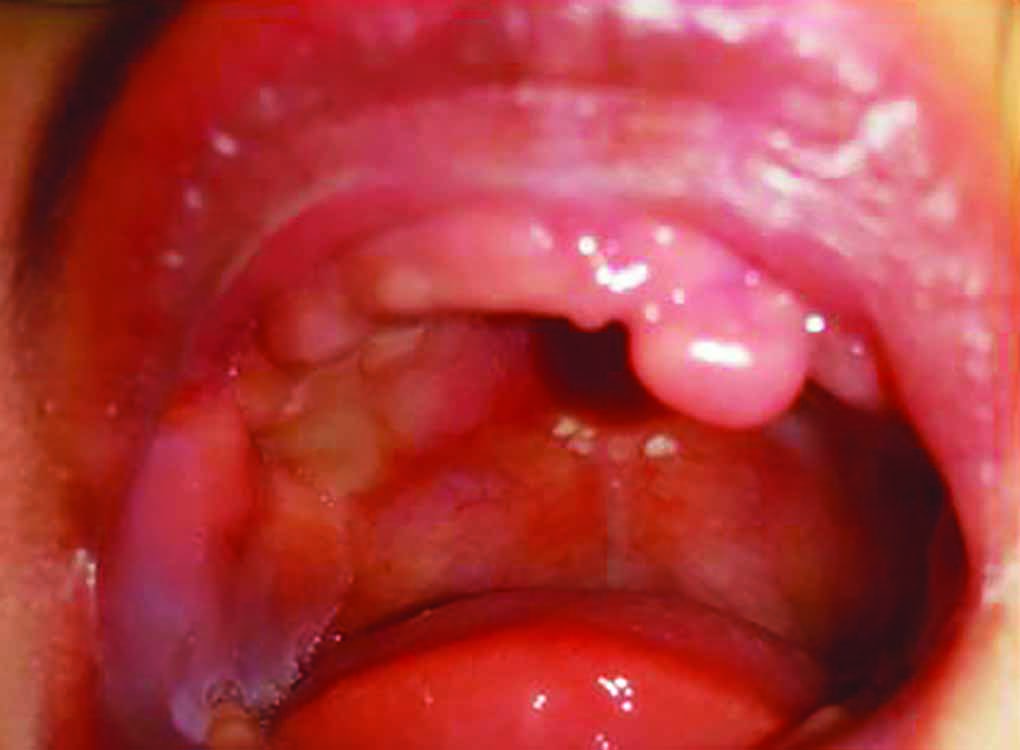 Fig. 1: Appearance of an intra oral mass arising from gingiva of the anterior maxilla

A three-day old female child with a lobulated swelling in the upper jaw was referred from the Department of Paediatrics to the Department of Pediatric and Preventive Dentistry. Even though respiratory distress was not evident in the child, the mother informed about the difficulty while breastfeeding the baby. Delivery was cesarean at full term and both maternal and paternal history was noncontributory. Medical history was also not relevant.

On clinical examination, a pink, lobulated, pedunculated, nontender, smooth surfaced mass measuring 2 × 2 × 1 mm was noticed on the maxillary alveolar ridge. It was firm in consistency. Adjacent tissue appeared normal on examination. The patient underwent surgical excision, and the tissue was sent to Department of Oral Pathology for Histopathological examination (Figs 2 and 3). 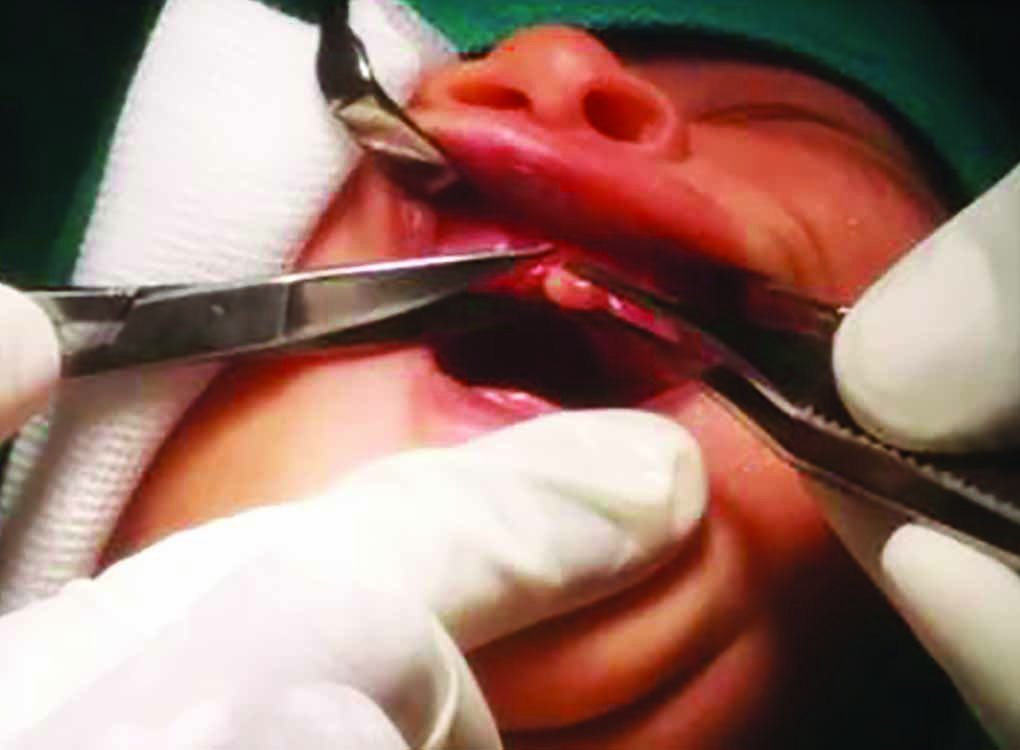 Fig. 2: Surgical excision of the lesion 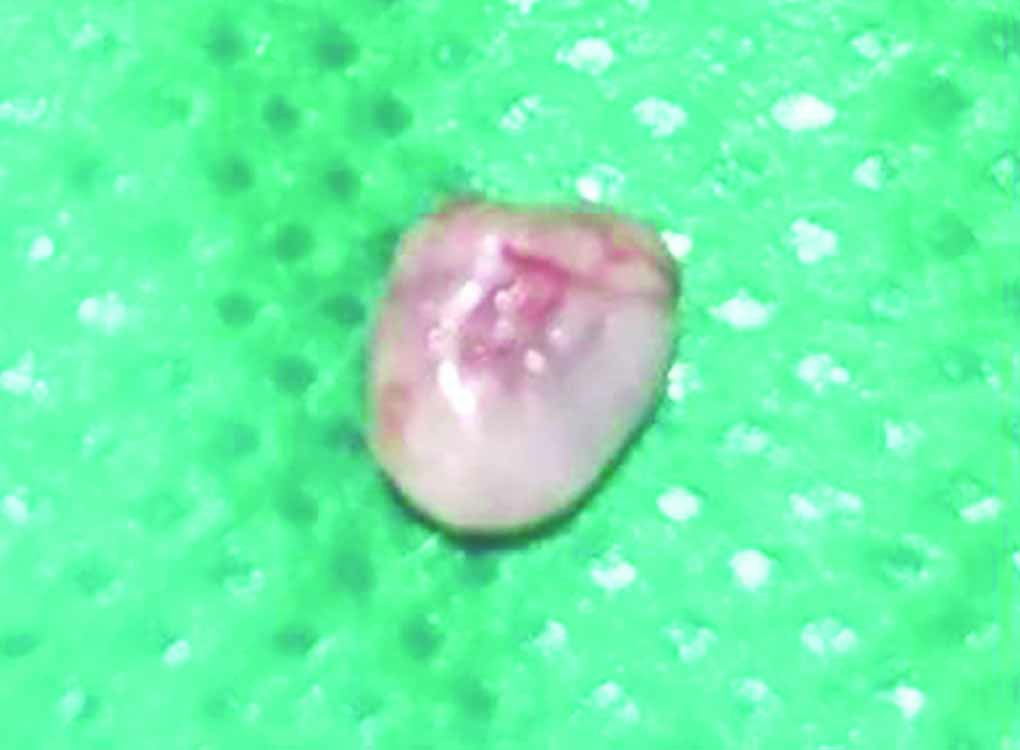 Postoperative course was normal. Feeding started 5 hours after surgery and, the patient was discharged 2 days after the intervention. Patient was recalled after every 2 weeks and no recurrence was found. Based on the clinical and histopathological findings, the lesion was suggestive of Congenital epulis (Fig. 4, Table 1). 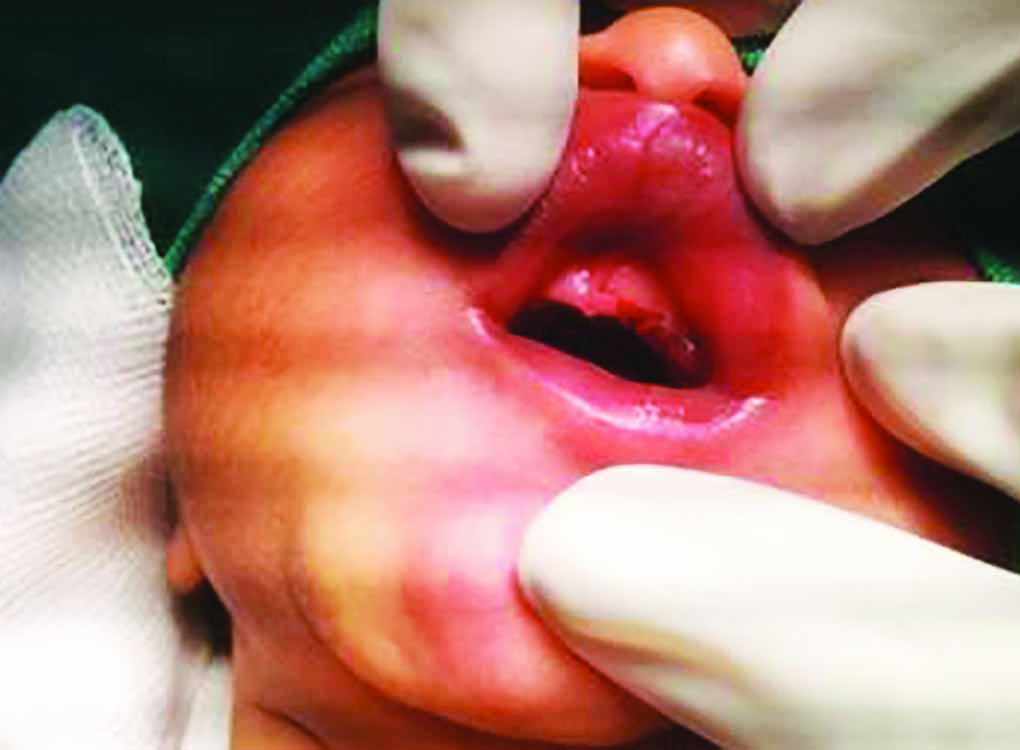 Fig. 4: Appearance of the alveolar ridge after the excision of the pedunculated lesion

Histopathological report of the H and E-stained section revealed lesional tissue in the connective tissue area, where plenty of polygonal shaped to round shaped cells with granular cytoplasm and round centrically placed nucleus are noted. Associated with this, plenty of capillaries and blood vessels are noticed. The deeper areas show spindle shaped cells. The overlying epithelium is stratified squamous parakeratinised and is atrophic in nature. Which is suggestive of congenital epulis Figures 5A to C. 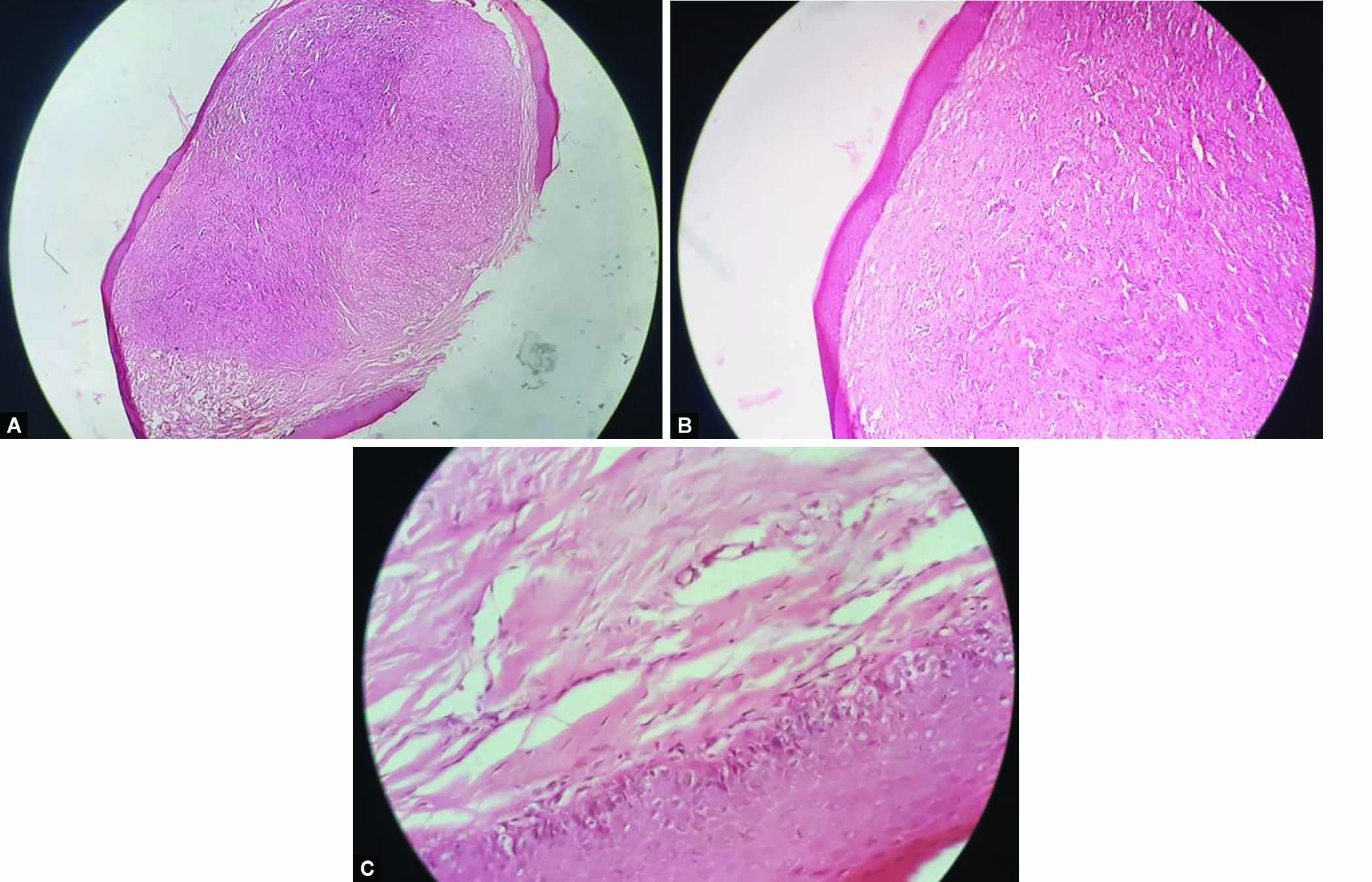 Congenital epulis is commonly found in neonates as a mass derived from gingiva.1 The clinical presentation of which shows a lobular or ovoid, sessile or pedunculated swelling enveloped by a smooth mucosal surface.1,10,11 The most affected site is maxilla, which is 3 times more frequently than the mandible.6,12,13,18 The lesion has a site predilection for the maxillary alveolar process, lateral to the midline in the region of the primary canine and lateral incisor, and is seen rarely in tongue.4 There are many distinguishing features, such as occurrence exclusively in the neonate, typical site, plexiform arrangement of capillaries, and lack of pseudo epitheliomatous hyperplasia.4

The frequency of occurrence in the canine and incisor region can be attributed to the fact that the maxillary anterior region is a common site for supernumerary teeth. An endogenous hormonal influence has been proposed to explain the female prevalence and the intrauterine growth, but this theory is not proved since detectable oestrogen and progesterone receptors within the lesions are absent.5 Histologically, presence of odontogenic islands is suggestive of odontogenic anomalous origin or hamartomas derived from odontogenic epithelial rests.1

In such cases, regular monitoring of the lesion for regression has been advocated as an acceptable clinical approach. The reasoning is that the Congenital Epulis has an inherent tendency to involute without exhibiting postnatal growth.8

Differential diagnosis of Congenital epulis is done with the other neuroectodermic lesions of the oral cavity in the new-born like teratoma, leiomyoma, congenital dermoid cyst, congenital cystic choristoma, congenital fibrosarcoma, congenital lipoma, hemangioma, and granuloma.19