Evaluation of Three Different Bleaching Agents in Permanent and Primary Teeth: An In Vitro Study

Aim:: To evaluate the effectiveness of three different bleaching agents in permanent and primary teeth.

Materials and methods:: The study was done on 60 freshly extracted single-rooted teeth (30 permanent and 30 primary incisors) with intact coronal portion. The teeth were artificially stained with whole blood as the staining medium in a high-speed centrifuge. The discolorations were determined by the use of 3D Master Vita shade guide. The conventional endodontic treatment procedures were completed in all the test samples. The test samples were divided into group I (permanent teeth) and group II (primary teeth). The test samples were further divided into three subgroups according to the experimental materials used for bleaching [group IA—10% carbamide peroxide (CP), group IIB—9.5% hydrogen peroxide (HP), and group IIIC—10% sodium perborate (SP)]. The samples were evaluated at 7 days and 14 days after the completion of intracoronal bleaching procedure. 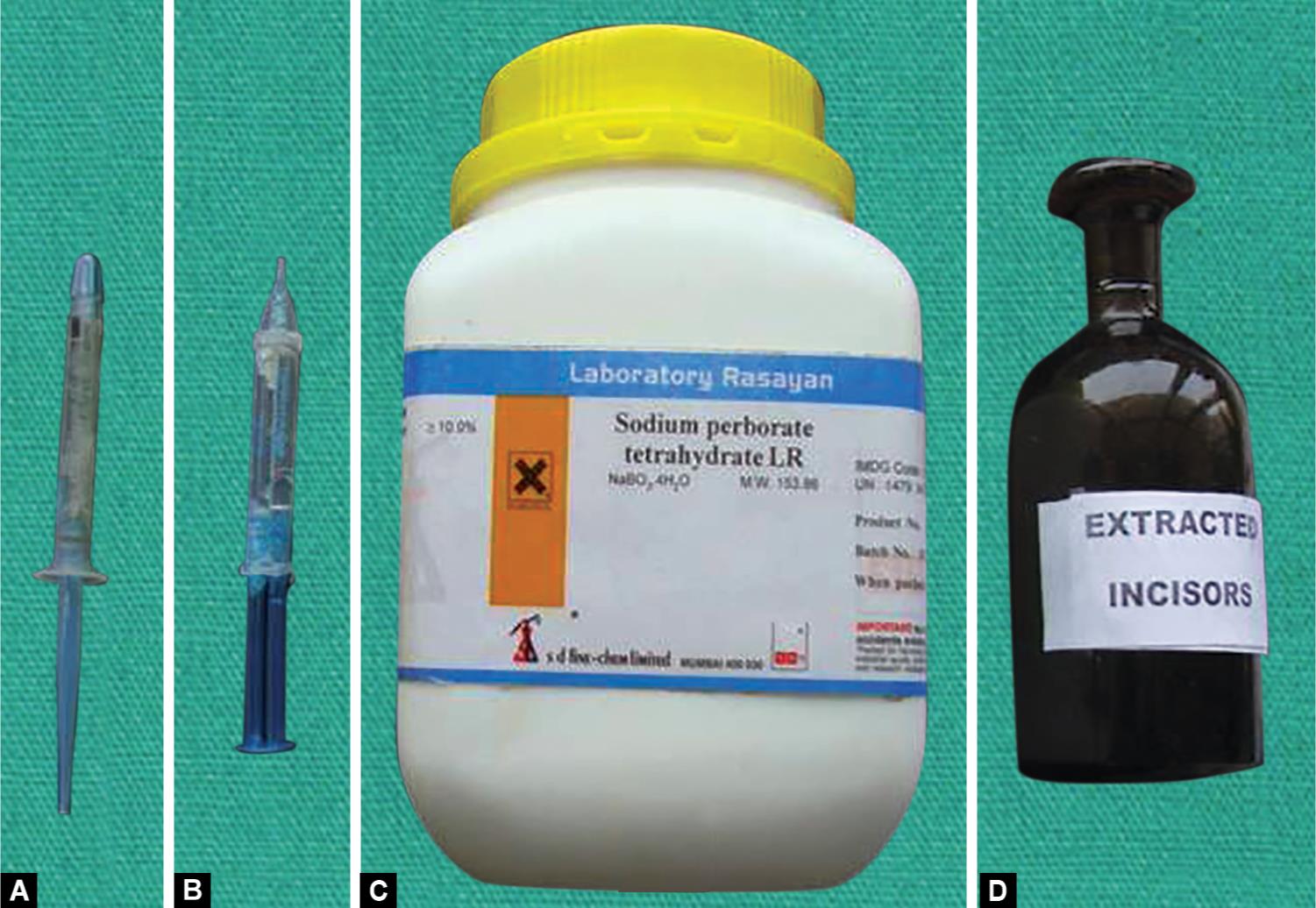 * p value of less than 0.05 was considered as significant

*p value of less than 0.05 was considered as significant

The dental professionals were perplexed for the treatment of discolored teeth since last two hundred years and have tried different chemical methods to remove various types of discolorations in the teeth.1 The tooth discolorations are classified as extrinsic and intrinsic, where the extrinsic stains can be removed with the routine prophylactic measures in the dental office.2 The intrinsic discolorations in the tooth might result from penetration of discoloring agents in the dentinal tubules, systemic medications, excess water fluoridation, or due to by-products of the body such as bilirubin released into the dentinal tubules during illness.3 The intrinsic stains can be treated by various measures such as internal bleaching of nonvital teeth, external bleaching of vital teeth, microabrasion of enamel and prosthetic rehabilitation by crowns and veneers.4 The intracoronal bleaching is an established, simple, cost-effective, and conservative method for improving the color of discoloured teeth in permanent and primary teeth. The advantage like minimal patient compliance makes the intracoronal bleaching technique more applicable in the children and young adolescents.1

The hydrogen peroxide (HP) (30% and 35%), sodium perborate (SP), carbamide peroxide (CP) (10%, 20%, 35%) are the most commonly used bleaching agents for permanent and primary teeth.5 Hydrogen peroxide is a strong oxidizing agent that can penetrate dentin and releases oxygen, which further breaks the double bonds of organic and inorganic compounds inside the dentinal tubules causing decolorization of the stains.6 One of the main undesirable consequences of intracoronal bleaching with HP was external cervical root resorption of the tooth. The excessive diffusion of HP into the periradicular tissues, possibly through cemental defects, was the possible reason behind the cervical root resorptions in the bleached teeth. Although HP was a potent and efficient bleaching agent, there was still a controversy regarding its safety and possible adverse effects on the teeth.7

Sodium perborate is another commonly used intracoronal bleaching agents, which can be used alone or in combination with HP. Though the SP produces no adverse effects, it may take longer time to produce appreciable color change in the affected tooth.5 The different concentrations of the CP have been extensively used in the bleaching of the discolored teeth.8 The various experimental and clinical studies have shown that the CP shows significant color change by the intracoronal applications in discolored teeth.9 The CP carries low risk of external root resorptions than the HP and SP after the completion of bleaching in discolored teeth.10

The present experimental study was conducted in the Department of Pediatric Dentistry in a dental college and hospital. The present study includes a total of 60 freshly extracted teeth (group I = 30 permanent and group II = 30 primary teeth) with intact crowns. The extracted teeth were collected from the Department of Oral and Maxillofacial Surgery of the same dental college and hospital. The soft tissues and debris covering the root surfaces was cleaned with hand scalers. The teeth were immersed in 5% sodium hypochlorite for 1 hour and then stored in physiological saline until use.

The stored samples were stained using whole blood as the staining medium in a high-speed centrifuge. Each tooth was stored in a test tube filled one-third of the way with whole blood and incubated at 37°C for 4 hours. Each tooth was then centrifuged at 2,500 rpm for 20 minutes, twice daily for 3 consecutive days to enhance the penetration of hemolyzed red blood cells into the dentinal tubules. The precipitate, which got collected at the bottom after the centrifugation procedure, was removed, and the teeth immersed were in remaining hemoglobin-rich hemosylate left in the upper part of the test tube for a further 3 days, centrifuging it twice daily as previously described. The resultant discolored teeth obtained were then washed with distilled water.

After standard access cavity preparation, the root canals were cleaned and shaped using 5% sodium hypochlorite and normal saline for irrigation. Biomechanical preparation was done with K files, and the canals were subsequently enlarged using step-back technique in permanent teeth and selective filing technique in deciduous teeth. This was followed by obturation with zinc oxide eugenol in primary teeth and gutta-percha with root canal sealer using lateral condensation in permanent teeth.

The teeth were randomly subdivided into three experimental groups, according to the bleaching material used in the pulp chamber in both permanent and primary teeth (subgroup A: 10% CP gel; subgroup B: 9.5% HP gel; subgroup C: 10% SP paste) (Fig. 1). Two millimeters of root canal filling was removed below the vestibular cementoenamel junction, and the remaining obturating material was covered with a 1-mm-thick cervical seal of cavit (Fig. 2). Around 0.04 mL of bleaching agent was syringed into the access cavity of the tooth and then sealed with temporary sealing material. After 7 days, color of bleached teeth was determined. The original bleaching agent was then washed away, and a fresh portion of bleaching agent was syringed into the access cavity. The teeth were then again evaluated for their shade change after another 7 days. All the data were collected and tabulated. All these values were further statistically analyzed for evaluation.

Table 1 shows the mean values obtained for shade lightening of all the permanent and primary teeth on 0, 7, and 14 days. The CP group shows lowest shade values (group IA = 2.6 and group IIA = 7.2) and SP group showed the highest shade values (group IC = 8.5 and group IIC = 8.3) after 14 days in both permanent and primary teeth.

The intracoronal bleaching technique was introduced by Spasser, who employed a paste made up of SP and water, which was temporarily placed in the pulp chamber. This technique was modified by Nutting and Poe, who replaced water by superoxol. Stewart described the thermocatalytic method, in which a cotton pellet saturated with superoxol should be placed in the pulp chamber and heated with an instrument.13

According to Lim et al., it is well established that visual color determination is subjective and can be compared to the accuracy of spectrophotometer evaluation.8 Vachon et al. suggested that although the spectrophotometer readings might indicate a statistically significant difference, these differences could be clinically identical to the human eye.14 Thus, in the present study, the color changes in each specimen were evaluated using the Vita shade guide under standardized lighting conditions.

Placement of cervical seal after the endodontic treatment of the tooth is important in intracoronal bleaching technique so that the bleaching agent does not leach to the root, thus causing root resorption.15 The etiology of external cervical root resorption is unknown but it has been suggested that passage of bleaching agents to the periodontal tissues through the dentinal tubules would cause an inflammatory process around the teeth.15 Utilization of a cervical intermediate base following root filling is advocated for the prevention of external cervical root resorption in order to avoid penetration of the bleaching agent in apical and lateral directions.16 It was also recommended the placement of a protective base before intracoronal bleaching to prevent possible risks associated with HP.17 In the present study, a glass ionomer cement was applied over the canal filling to prevent the risks of cervical resorptions in primary and permanent teeth.

Carrasco et al. reported that the 37% CP as an intracoronal bleaching increased dentinal permeability, which was not observed for 27% CP.18 Thus, the use of CP at lower concentrations should be recommended to reduce the frequency of cervical root resorptions.19 The degradation of 10% CP releases 6.4–7% of urea and 3–3.6% of HP where as the 35% CP releases 23–25% of urea and 10–12% of HP.20 According to Braun et al., the high concentration of bleaching agent promotes faster tooth bleaching; however, considering the biological aspects, it is recommended to use the low-concentration agent to avoid damage tissue.21

Lim et al. concluded that 35% CP could be recommended as an effective alternative to HP. However, in this concentration, the biological effects of CP to dental and periodontal tissues should be more studied.8 Shaheen et al. have evaluated the efficiency of 10% CP in the primary teeth and observed that intracoronal bleaching using 10% CP is an effective approach for whitening discolored extracted primary teeth.22 Thus, in the present study, 10% CP gel was used in comparison with the SP mixed with water and 10% HP.

The results of the present study are in accordance with Lim et al., who reported that though the effective HP released was less with CP, it was equally effective to HP as a bleaching agent.8 The effectiveness of CP can also be attributed to its ability to improve the dentin permeability and to penetrate deeper, which further allows the reversal of chromatic alteration of the dental tissue by oxidation reactions.24 In the present study, CP has shown better lightening effect than by the SP, which was in accordance with Carrasco et al. who reported that the dentin permeability of CP is also higher than of the SP, which proves the better lightening effects of CP than of the SP.18 However, the present study results are contradictory to the reports of Perrine et al. who observed no statistical significant difference between the 10% CP and SP in the tooth whitening.25

Though every effort was taken to imitate the exact clinical conditions in the present study, increasing the number of teeth per group might improve reliability of the results. The authors further recommend the in vivo or randomized controlled trials for more reliable results for treating the discolored anterior teeth.

The CP was considered as an effective bleaching agent in the treatment of discolored permanent teeth. The CP, HP, and SP are equally effective in treating the discolored primary teeth.